If you are not familiar with art history, a painting titled ‘nude descending a staircase’ probably conjures an image of a naked person halfway down a stair, poised in the act of moving from one step to another; but what Marcel Duchamp gives us is this: 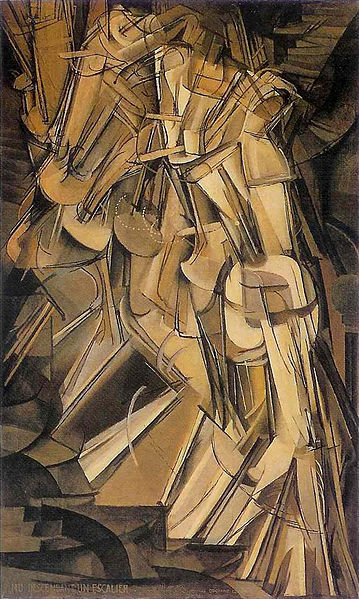 Here, by way of contrast, are two decently-clad Irishmen, my maternal grandfather and his brother:

If we were asked ‘which is the more natural or realistic portrait?’ most people, myself included, would (I suppose) choose the second – after all, it shows two men whom we would recognise were we to meet them in the street (an unlikely eventuality, I grant you, since both are long dead), whereas it is arguable whether or not Duchamp’s picture even shows a recognisably human figure; and yet –

Is there not more truth in Duchamp’s picture than if it showed a naked figure as I have described above, poised on a particular step? And is there not a great deal more convention and a great deal less realism in the photograph than we at first suppose? After all, a nude descending a staircase starts at the top and passes over every step till it reaches the bottom; and if we want to insist on ‘descending’ as the key word rather than ‘nude’ then there is a great deal more of the descent in Duchamp’s picture than the conventional version I have described.

There is descent of a different sort in the photograph, but we don’t see much of that, either: just as I am descended directly from one of these men, both of them have a line of descent stretching back through their parents to time immemorial, a descent which has, in a variety of senses, made them the men they are; and then of course there are the more immediate forces that have shaped them: all that they have done and been, the sum of their experiences, their memories, all the connections they have made up to the point that picture was taken – rather like the structuralist model I have described here they are defined by what surrounds them and what has gone before them as well as by what they are in themselves; yet we see none of that – only the particular pattern of light they made at one instant in time. Is that a just representation of these men?

Is this, wonderful though it is, truly ‘a self-portrait, aged 63’ of Rembrandt van Rijn?

It was painted in the last year of his life and it is marvellously expressive, for not only is Rembrandt a great artist, but we are skilled readers of faces – so we can certainly see much of the man’s character and outlook there; but his self? the near-totality of all that he was from birth?

Could we not envisage another kind of portraiture altogether, one that showed (to stay with the structuralist idea) everything apart from the actual person that shaped or influenced or was part of him? Thus we might have his childhood home, his school, and a host of people – parents, grandparents, siblings, children, friends, lovers, enemies even, along with significant events and experiences. (For an example of a similar sort of alternative portraiture – and much else of interest in that line – see here)

To be sure, this would be no less of a convention – an agreed way doing something – but would it be any less valid or truthful?

(Strangely, this brings to mind a poem by Seamus Heaney, the last line of which can still move me almost to tears: From the Republic of Conscience – perhaps it is because in writing this piece originally, I mused on the fact that in signing a photograph for a passport application, we attest that it is ‘a true likeness’ of the person shown)

But there now – I have come all this way and not arrived at the thing I really wanted to discuss, which was space, time and Immanuel Kant – another day, perhaps.

2 thoughts on “A true likeness?”