The idea of a ‘dream bicycle’ is probably as old as cycling itself, though it can seldom have been portrayed with quite the combination of literary allusion and brand specificity as in this marvellously preposterous poster from 1897 (probably intended as a magazine insert) which features as the frontispiece in that invaluable reference work, ‘Sunbeam Cycles – The Story from the Catalogues 1887-1957‘ (Pinkerton, Roberts, Hadland & Lawrence, available through the V-CC):

The origins of my own dream bicycle are complex, and some lie a long way back in my cycling career, but I will try to disentangle them another time. Here, I’ll just consider how far those dreams have come (so far). And since every picture tells a story, and one is worth a thousand words, let’s do it that way:

In the beginning, there were two roadster frames:

The old and the…even older

This isn’t the beginning at all, of course, but mere continuation: the frame with the components is the remains of the Mk II Dream Roadster, which had stripped a thread where the lh chainstay and seatstay bolt together, and then been laid aside when one particular component (of which more later) proved recalcitrant (it has been removed in this picture, which is what precipitated the latest rebuild). The other frame is a 24″ Raleigh DL1 type, picked up on eBay, then set aside till this moment…

The Raleigh frame, black with red and gold lining but very scruffy, incorporates a steering lock, which may indicate that it came from a Superbe. I sourced the key from Old Bike Trader :

I repainted the Raleigh frame – dark green Hammerite, I’m afraid (I can be uncouth at times). To make matters worse, out of sheer whim, I inserted a green glass pebble into the thimble on the fork crown. 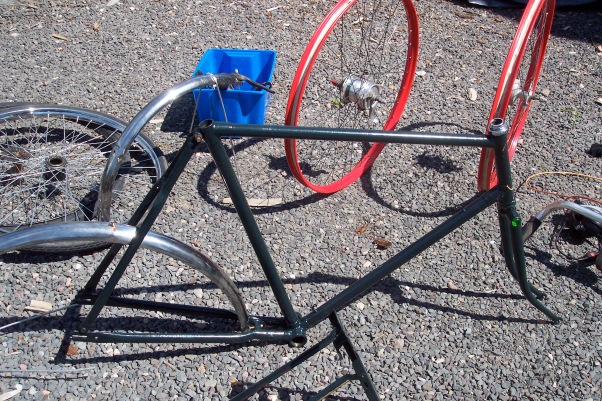 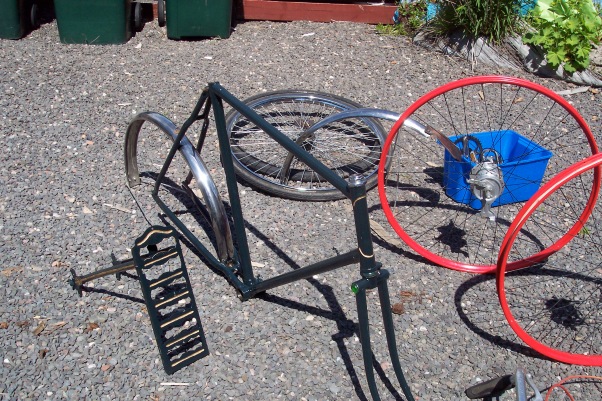 The recalcitrant component, by the way, is lurking in the blue box. Other things of interest are the inverted Nitto promenade handlebars (with SRAM grips and twist shift) a big double-sided Lucas bell (attached to the rear of the stem) Gilles Berthoud stainless steel mudguards (with GB front mudflap in stout leather) and Smart BL-201 headlights powered by a lead-acid battery, ‘Princip’ rack (surely not named after Gavrilo?) and red powder-coated wheels with black spokes. All these were fitted to the previous two versions of the Dream Roadster.

The wheels (which I built myself) are fitted with SRAM drum brakes, and now have an SRAM Spectro P5 (formerly Sachs Pentasport) 5-speed hub  in the rear – the very first version had an SRAM Spectro S7 seven-speed hub, but of that, more later… they are fitted with Schwalbe Delta Cruiser tyres. The previous versions had cream-coloured Delta Cruisers, which looked rather well with the red rims, but they are presently on my 1934 Royal Sunbeam. The black looks pretty good too, I think… 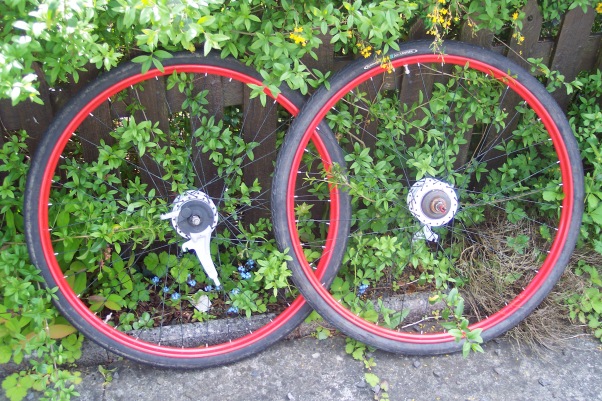 After an afternoon’s toil in glorious sunshine, the dream machine is beginning to take shape…

As my Brooks B90/3 saddle was currently on my 1923 RoyalSunbeam I thought I might make use of some bits and pieces I had lying around, including a B90/3 front spring and a rather nice old Middlemores cover (B185, I think). Why did they stop cutting those key-hole style slots? They look so much better than a row of three small round holes. 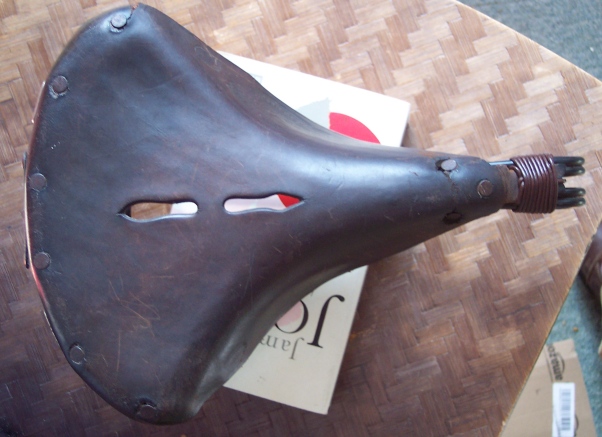 This, however, did not succeed – a cautionary tale. So when the Mk III was finished, I transferred the B90/3 to it (and while we are on the subject, why don’t Brooks – now so intent on trading on their heritage – revive their far-classier oval stamp? and why have they dropped the magnificent B90/3 and substituted the much less impressive B190?): 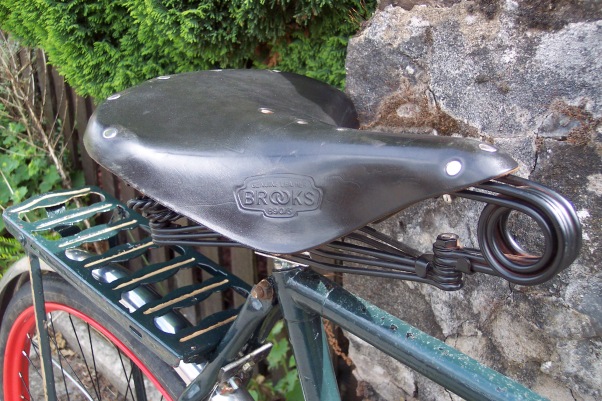 Here is the finished article: 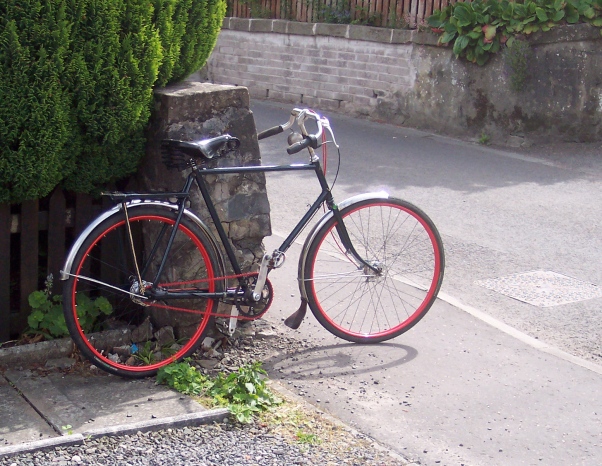 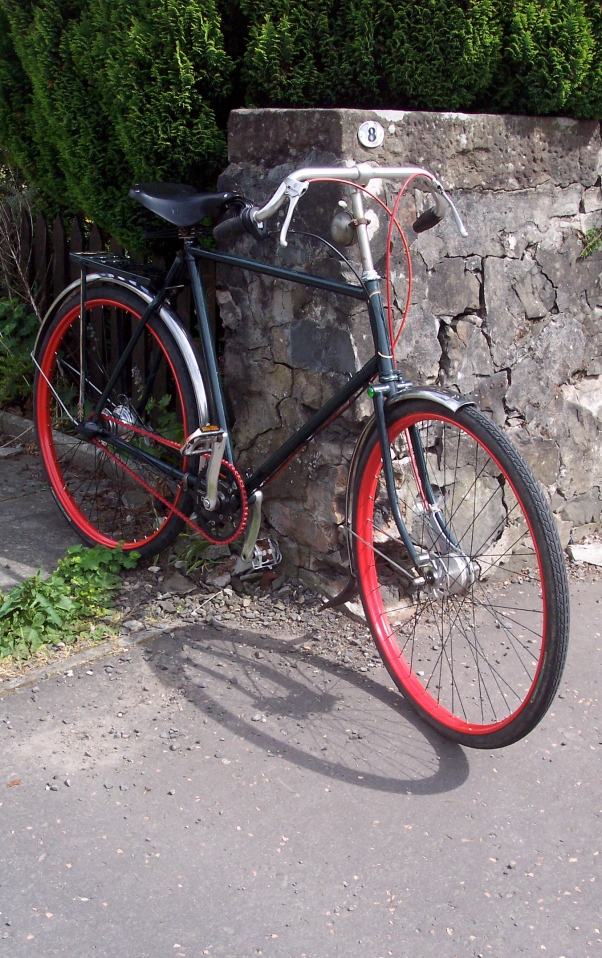 Also transferred from the previous machine is the Lucas mileometer (or odometer, if you prefer) another eBay find. For those of you unfamiliar with such technology, it is a purely mechanical counter, geared in this case to a 28″ wheel (the size is stamped on the body – M28) and usually operated by a striker fitted to the spoke clipping the five-spoke starwheel on the end of the counter (The SRAM hubs are so deep that I replaced the striker with a screw projecting from the flange). This one did have a sojourn on the 1923 Sunbeam when I took it on an epic ride from Inverness to Perth, but unfortunately I put the striker in the wrong place and it turned the wheel the wrong way so the counter ran backwards… I must have lost 120 miles or more that trip. 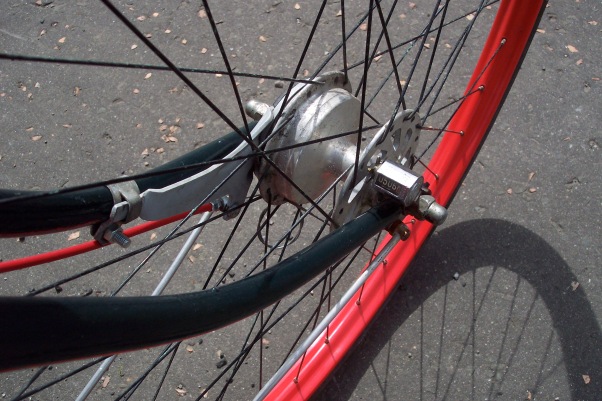 The rear wheel is equipped with an SRAM Spectro P5 hub with drum brake (originally known as the Sachs Pentasport). Instead of the familiar chain, the changer mechanism at the hub is a ‘click-box’ which is very easily removed and replaced, once you get the hang of it. You can fit a guard to protect it, but I’ve got rather too much on that side of the axle already. With the present set-up, 48T front 18T rear (2.67:1) and 28″ wheel, the hub gives the following range of gears: 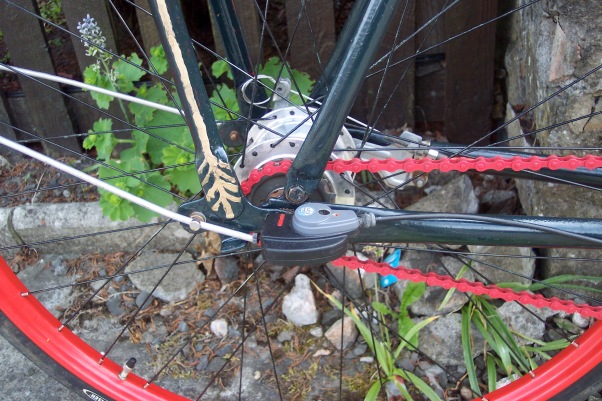 And if we combine that with the recalcitrant component whose removal so long delayed the rebuild, we get interesting results. This is a Schlumpf Mountain Drive, a two-speed epicyclic bottom-bracket gear, the revival of an idea pioneered by Sunbeam 110 years ago, in 1903: 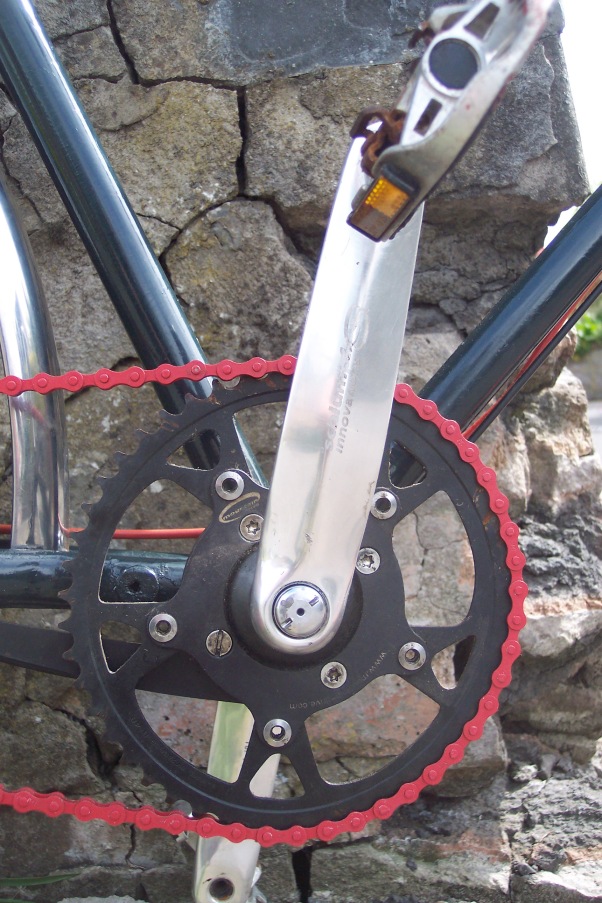 O well – maybe I need the assistance of a supernatural talisman:

The Green eye of the Little Yellow God

If you are not familiar with the reference, it is from a famous ‘parlour poem’ that was still current in my youth, though I doubt it is much heard now – see here.