A catchpenny headline, I grant you, but I hope to persuade you of the truth of it. 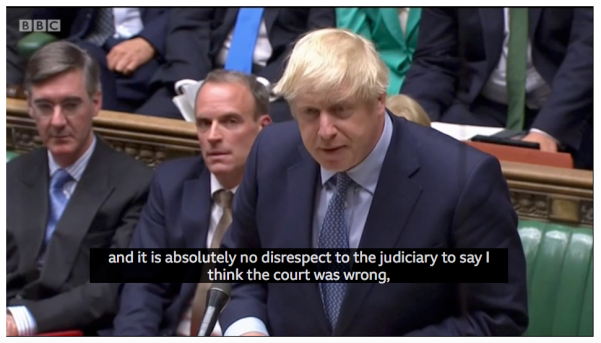 By any measure, yesterday in parliament was an extraordinary spectacle. Here we had the least successful prime minister of all time, whose government has not won a single vote since he came to office, who has lost his majority live on television then compounded that loss by expelling more than a score of his party’s most loyal members (a band later joined by a defector from his own cabinet) – thereby rendering himself incapable of governing – who had the day before been the subject of an utterly damning defeat in the Supreme Court which judged him to have acted unlawfully in proroguing parliament for five weeks instead of the usual few days at a time of national crisis, yet in the face of all that, he was brazenly unabashed.

The warm-up act was his loud-voiced Attorney General Geoffrey Cox, who in an extraordinary demonstration of what psychiatrists call ‘negative projection’ attributed to the benches opposite every fault that was true, a fortiori, of his own government – that they were paralysed, incapable of coming to a decision, a dead parliament,  a disgrace, a zombie parliament without the moral authority to occupy the benches they sat on; he charged them with cowardice for failing to call a general election when his own government is so powerless that it cannot even do that for itself – he actually called on them to move a vote of confidence, not because he thought they would lose, but because he was sure his own government would be defeated.

Then came the main act. The tone was set early on when the Prime Minister asserted that he meant no disrespect to the Supreme Court when he said that they were wrong – this is a man who speaks in conundrums and contradictions, who likes nothing better than to deliver a sentence where the second part flatly contradicts the first and to move rapidly on while mouths are still gaping at the sheer brazenness of it – did he really say that? It was the same with the most infamous episode, where he dismissed as ‘humbug’ the plea by Jo Cox’s successor to moderate his language because it would inflame violence and put MPs’ lives at risk; while people were still fuming at that, he went on to suggest that the best way of honouring Jo Cox was ‘to get Brexit done’.

Given that Jo Cox was shot and stabbed to death in the street, in the run-up to the 2016 referendum, by a man who shouted ‘Britain First’ as he murdered her and later gave his name in court as ‘Death to Traitors, Freedom for Britain’, it is difficult to find a scale of inappropriateness on which the Prime Minister’s remark can be measured.

And yet there will have been those looking on who thought, not in spite of this shocking behaviour but because of it, that here was a man who could win an election.

In that they will have been emboldened by the success of Donald Trump on whose behaviour Boris Johnson has increasingly modelled his own, as last night’s performance demonstrates – and be in no doubt that a performance is what it was, cynically calculated to play well with pro-leave voters as it is conveyed to them through the sewers of The Daily Mail and The Sun and the other conduits of feculence that form their views. Those rags will present it as ‘the people’s champion’ standing up to the ‘Liberal Remainer Establishment’ – a term that encompasses Parliament, the Supreme Court, experts and anyone who is capable of articulating a reasoned argument to show that we are better off in the EU.

And this is where the Conservative party faces a stark choice. Across the Atlantic, the Republican Party ushered in the reign of chaos by throwing in their lot with a man they knew to be dangerously unfit for office, whose political credentials as a genuine Republican were doubtful at best, all because they thought he could win and keep them in power. That act of ignoble self-interest has not only served their country badly, it has made the world a more dangerous, unstable place.

If the Conservative party back Johnson because they think he can win and he does, then they will find themselves prisoners of their choice in precisely the way that the Republicans have in backing Trump: we will be out of Europe (on bad and economically-damaging terms), trying to stand alone against economic superpowers – China, USA, India and indeed the EU – and our government will be in the pockets of a small band of very rich men. It will suit the likes of Mogg, Duncan Smith, Johnson and the wealthy, privileged elite they count as friends but the notion that it will be a victory for ‘the people’ is a very sick joke indeed.

Para. 55 of the Supreme Court’s judgement opens with a timely reminder:

‘Let us remind ourselves of the foundations of our constitution. We live in a representative democracy. The House of Commons exists because the people have elected its members. The Government is not directly elected by the people (unlike the position in some other democracies). The Government exists because it has the confidence of the House of Commons. It has no democratic legitimacy other than that.’

Once you start talking, as an MP,  in terms of ‘people versus parliament’ you are disavowing the very thing that gave you authority to speak in the first place and espousing gangsterism – the gangsterism of Stalin, Hitler, Mussolini, Putin and Trump. There are, I am sure, enough decent Conservatives who are deeply worried by the direction in which Johnson and his advisers are taking their party, and who are as appalled as any decent people would be by his shameful and cynical conduct last night.

Now is the time for them to put Country before Party. Johnson has to go, and it is they who should take the lead in ousting him.