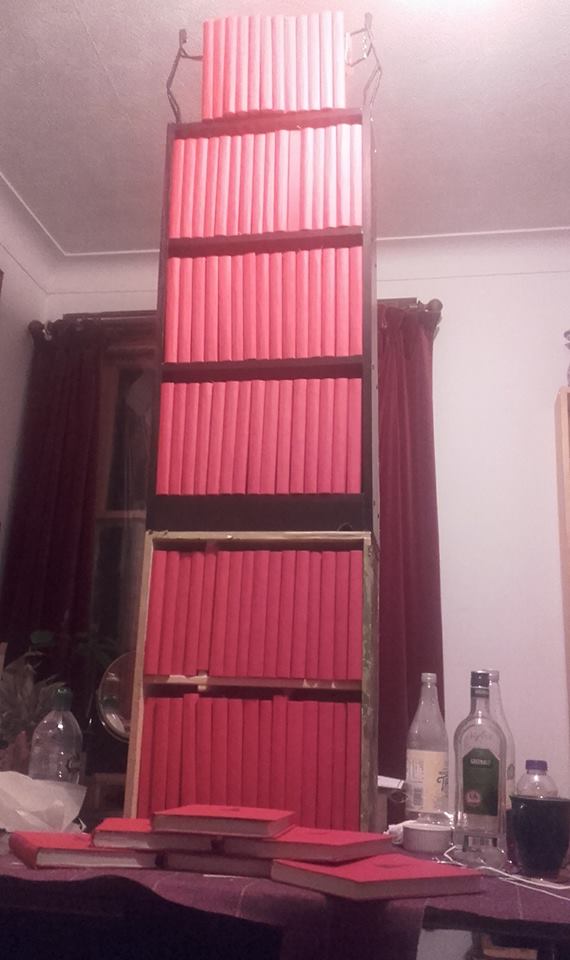 There is a point in any long enterprise when you realise that the end is not in doubt: provided you continue, you will complete it. This point may come some way before the actual accomplishment of the task – there could be a fair bit of a work to do, another mile to run, but by matching up your rate of progress with the time you have to do it and how capable you feel, you realise it is within your capability: you are going to do it.

When I reached this point with McAvinchey, I turned my mind to the question of promotion. I mention this here because I think it the one aspect of the enterprise that I did not do well and would certainly do differently next time.

My original plan had been to run a contemporaneous blog, detailing the history as it occurred day by day in the hope of generating an audience and maintaining interest up to the publication day. I still think that a good idea, but I realised early on that it would be one task too many on top of all the new things I was having to master. I did (just) manage to keep some dated notes for future use, and I put out a fair few updates on Facebook as I went along, but the trouble with Facebook is that its content is momentary – as a reader, if you catch something at the time it is posted, well and good, but finding it again later is not easy. As a poster, your best hope is that enough people comment and share to keep a post current for a time, but it does not create an easily-accessible record as a blog does (you can chase it up via your search history, and I did glean some useful dates and pictures when researching for this blog, but it is a bit laborious).

My fatal error, however, was not having faith in myself – I waited till I felt sure I was not going to fail, and in doing so I missed the possibility of being in the Wigtown Book Festival Programme. I had the venue, thanks to the kindness of Shaun Bythell, proprietor of that august emporium, The Bookshop, but the lack of advance publicity meant that any events had to be organised on an ad hoc basis and promoted guerrilla-fashion with hand-posted ads.

On reflection, this was an opportunity missed: I not only had a book, I had a good story to tell about it; indeed, with a little effort and forethought, I could have staged a demonstration of my bookbinding prowess as part of any event.

Not that the outing was by any means a failure – I organised a small but appreciative flash-mob via social media (even earning a mention in Trip Advisor from my guileful friend Dougie Macdonald) and I sold a good number of books, some to complete strangers; but with more faith in myself I could have done better.

Something else that has only become clear to me in retrospect are the implications of scale here. 100 books is not a lot. In terms of cost (discounting time, a matter already discussed in Chapter 11) it represented an outlay of nearly £900 of which £400 was investment in hardware that remained at my disposal, such as the printer and various tools.  In practical terms, that meant that 34 books sold was sufficient to break even, 60 sold meant the enterprise had paid for itself entirely and anything beyond that was profit, up to a maximum of £600 – not a bad return on my investment.

Although I knew this beforehand, what I had not taken on board was how it should influence my promotion strategy. To sell 34, 60 or even 100 books is a target that is eminently realisable: you do not need to go about it in the same way you would if you aimed to sell thousands or tens of thousands. More importantly, you need to place a proper value on your books – there are few enough of them, and each is a step on the road to breaking even, recovering your costs, making a profit – so don’t waste them.

With that in mind, I would draw the following lessons:

2(a) The law requires you to send a copy to the British Library within one month of first publication, which I did (purely out of vanity, I confess – I liked the notion of something I had made myself lurking in the vaults of the British Library for posterity). The law also requires them to send you a receipt. They didn’t, so I won’t be doing that again (the penalties are not onerous and would cost them more to enforce than they are worth). Should I repeat this exercise, I am resolved to become a literary outlaw.*

2(b) While we’re at it, there is neither a legal requirement to have, nor any practical advantage (at this level) to be had from, an ISBN. I hesitate to say that it is solely a means of putting money in Nielsen’s coffers, but what do you get for your £89, apart from a single ISBN? (though you could splash out for a block of ten for £159) Access to an international database? You only have 100 copies to sell. And if someone wants to find your work, an assiduous internet search will do that. Don’t bother with it. I didn’t.

3. Do, however, maintain a social media presence, ideally across a number of platforms. This blog links automatically to Facebook, Twitter and Linkedin, so that requires little effort on my part, but it has generated a considerable number of sales, both directly and through people retweeting and sharing. It’s what social media was made for – you don’t need to go viral to sell 100 books.

Now, if you’ve got this far, and have been keeping up, the more alert among you will recall that the Wigtown Book Festival opened on the 22 September, with the triumphant launch of Shaun Bythell’s splendid debut book, The Diary of a Bookseller, which I brazenly intended to latch onto for my own advancement, much as the Fool in King Lear cynically advises:

‘Let go thy hold when a great wheel runs down a hill, lest it break thy neck with following it: but the great one that goes up the hill, let him draw thee after.’

so you may wonder why, then, the posters above are dated 29 September – but that is a tale for another day; tomorrow, in fact, which will bring us to a happy close, with some speculation about future directions. For now, fare well.

*if any of the five other libraries – The Bodleian, Cambridge University Library, the National Library of Scotland, the National Library of Wales and the Library of Trinity College Dublin – that are entitled to one copy on request would like one, you’d better be quick. There’s not many left and I won’t be holding any back for you if someone wants to buy them. There’s a limit to even my vanity, and sacrificing £75 worth of books surpasses it.