My friend Karin has a book coming out shortly called Bertram Likes to Sew. It’s about a water vole who finds that he prefers sewing to more traditional water vole pursuits, like swimming:

Bertram © 2018 courtesy of Celestine & the Hare

I’m with Bertram, though aside from buttons, I have only ever sewn two kinds of thing – bow-ties and books. There was a time in my life when I affected a bow-tie, and I thought I might as well do it properly, so I made my own from silk and learned how to tie them, too (it’s exactly like shoelaces, as it happens). I recall a happy evening about quarter of a century ago listening to Mozart’s Don Giovanni on the wireless (another first) while making bow-ties (I have them still).

The sewing of books is a satisfying occupation: I would recommend it. It is the first real transformation in the whole process. Even though there has been a great deal of work already – typesetting, printing, collating, folding, pressing, sawing – all that is but preparation for the main creative act, which literally pulls it all together. The final preparation is sorting the thread for ready use, as detailed in the previous chapter.

Now boxes of folded signatures piled on one another with weights on top – an economical method of pressing that requires no specialised equipment – stand in readiness for the great transmutation. 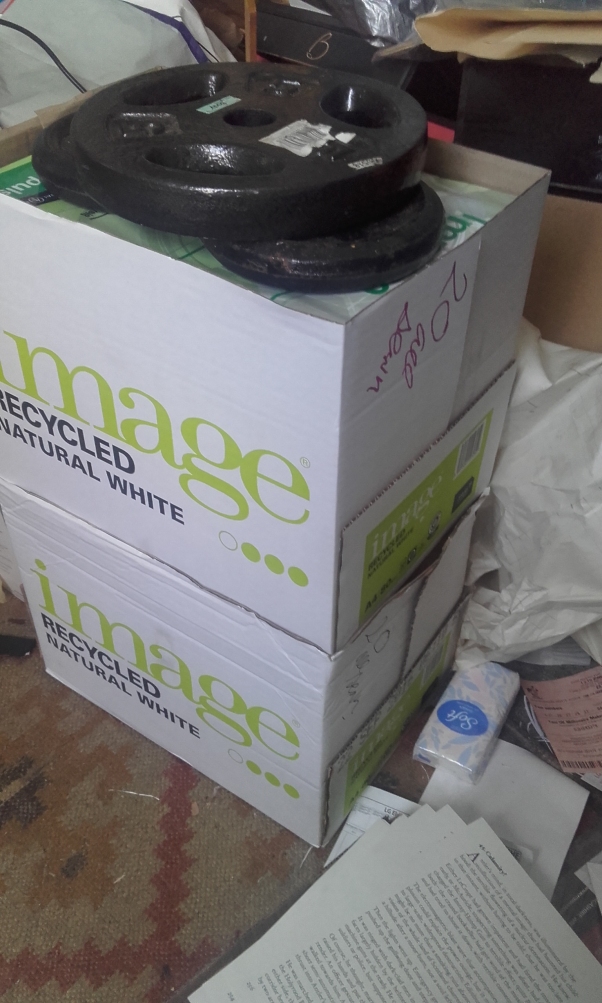 actually sewn signatures, as the scrawl on the side indicates, but demonstrates the principle of cheapskate pressing: weights and a ream of paper press the top box, which in turn presses that below, and so on. There are 40 books here, all told, each box having two columns of ten.

Take out five complete books and have them ready to hand. Likewise your box of thread:

First, you set up the frame, which consists of getting the bar level (simple) and then stretching the tapes 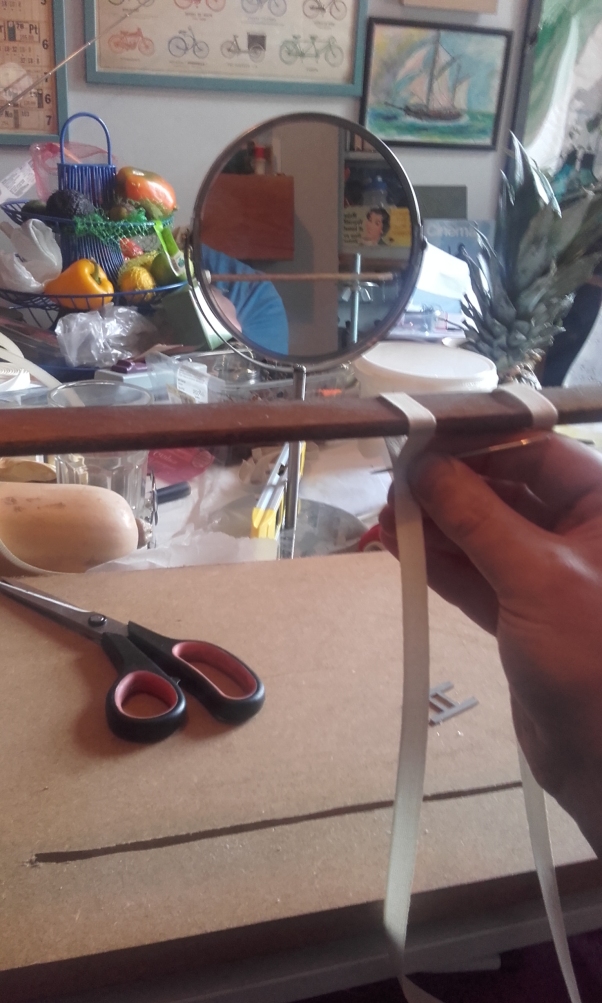 Fixing the tapes at the bar. They are then passed through the slot in the base and secured using the keys, one of which can be seen lying on the baseboard, to the right of the tape

This process is a great deal more fiddly than it is made to look in this admirable explanatory video from Bookbinders Chronicle:

The principle of fitting the tapes to the keys – H-shaped bits of metal, but with a double crossbar – is simple enough – the same as those belt buckles that use a pair of rings – but in practice it’s remarkable how many ways you can find to do it wrong. However, once you have it done and the tapes are in place and taut, it’s time to begin.

one book sewn, four more of this batch to go; meanwhile, the cases stand drying on the right.

The position can seem awkward at first, since the signatures face away from you, with the spine towards you, so that all the sewing on the inside of the signature is effectively done blind; I did find that a well placed mirror was a help (the problem is not just that you can’t see the holes, but that you can’t see your hand, either – though seeing it in mirror image can cause its own confusions)

You start with a book’s worth of  loose signatures to your right hand, facing up, as it were, then take the first and flip it over on the frame, so that it is now face down, spine towards you, with the top edge to the right. The errors you wish to obviate in sewing are two: getting the signatures the wrong way round or in the wrong order. It obviously helps to start with them in order, but having them numbered at one end of the spine, as I did, is a simple and effective check, since it ensures both that they are the right way round and in the right order.

You have your needle threaded with two metres of thread and start by entering the hole farthest to the right, drawing the thread through till only a tail of a few centimetres is left. You come back out through the next hole,  go over the tape, then in the next and so on, drawing the thread tight by holding both ends when you come out the last hole, the farthest to the left. You then add the next signature and proceed to sew it in the opposite direction, left to right, tying the emerging thread to the tail when you reach the end before proceeding to the next (all this is shown in more detail in the video above). 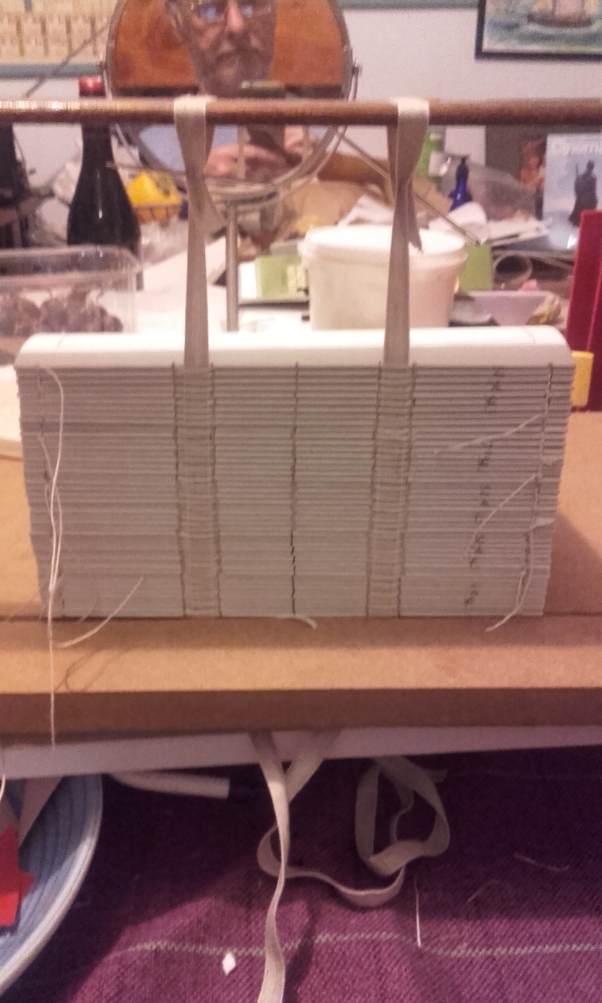 One batch of five complete. The tapes are released and drawn down till you have about 3cm on the top side and 6cm between the top book and the next before you cut, and so on till you’re done and you have five books ready for next stage

With the radio on in the background and the pile of sewn books accumulating steadily in front of you, it is one of the pleasanter ways of passing the day indoors.