Even if you are not costing your time in making a book, you still want to keep track of it (just in case you want to do it all again…)

One thing I should certainly advise is keeping better records from the outset than I did. Only when I started actual printing did I begin to make detailed notes – these have proved a useful record, since the entries were dated, though my intention at the time was simply to keep track of the number of pages I printed, in order to track my toner consumption. (On this point, why don’t printers incorporate some sort of counter? I’m sure it must be easy enough – I recall that the Banda machine of my childhood, in the school office, certainly had one – but then it was a mechanical spirit duplicator, with an intoxicating smell)

You may wonder what the ‘page yield’ for a given toner cartridge – say 3k, or 3000 pages – actually signifies. The calculation is based on a standard letter printed on A4 with a ‘5% page coverage’, but what exactly does that mean? You will find an admirably clear and detailed answer on the Stinkyink website, including advice on which fonts are the most economical, but what I discovered was that it equated almost exactly to the A5 book pages I was printing – a single cartridge regularly yielded 750 duplex-printed sheets, the equivalent of 1500 A4 pages, but since one side actually consisted of two A5 pages the equivalence was almost exact (as a general rule, I got slightly more).

However, before I could start printing, I first had to set up the proof, which I did using Adobe InDesign.

The evidence suggests that I began wrestling with InDesign around 17 July, which is something of a puzzle, since it was the local printer’s estimates that decided me to do the job myself, and I did not get those till 19 July. It may have been that I was initially thinking of using it to prepare a text for him to use.

In any case, it is evident that I spent some time getting to grips with InDesign’s peculiarities, since these initial files are saved as ‘books’ (.indb) rather than ‘documents’ (.indd). Naive fellow that I am, I had assumed that when making a book in InDesign you choose ‘create new book’ when in fact ‘create new document’ is what you want. ‘Book’ in InDesign means something other than its commonly accepted meaning. I mention this as something of a characteristic: I did not find InDesign easy to learn – it is by no means instinctive. However, I am willing to accept that it is good at what it does, once you get the hang of it – fortunately my firstborn daughter was on hand to help me.

(I had owned InDesign as part of an Adobe Creative Design Suite I had purchased some years before in what proved a false start in attempting to master e-publishing and related matters. I believe it is no longer possible to buy it outright – you have to lease it. I can see that eventually I will have to go back to actual letterpress printing to remain independent)

I had ordered the laser printer on 24 July and this proof of commitment clearly concentrated my attention, since by 30 July I had produced my first proof of The McAvinchey Codex on InDesign though I think at this point I may still have been exporting it to Acrobat as a PDF in the vain hope that I could overcome Acrobat’s inbuilt tendency to shrink all booklets from what it shows on the screen, alluded to in Chapter 4. It took some time for me to realise that printing direct from InDesign was the way to get what I wanted.

Mastering a particular computer package is a bit like acquiring mental hardware – it may take a bit of time, but once you’ve got it, then it’s always available. It must have taken me something under a month all told to get to grips with InDesign, since by 17 August (my first written record of printing) I had printed my third proof copy. 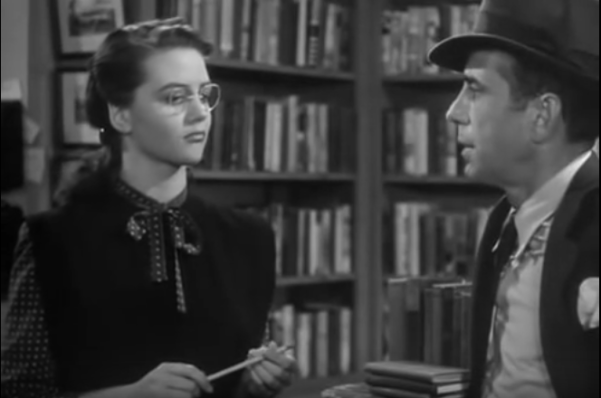 ‘Know anything about rare books?’

Anyone who has had to do with writing books will know that proofreading (a) always takes longer than you think (b) still manages to miss several errors that leap out at you from the first printed version. On the other hand when you are printing your own limited editions you can take comfort from the fact that each minor error adds to their singularity, and in future years might – who knows? – make them priceless. (Picture Humphrey Bogart as Philip Marlowe visiting the Acme Bookshop in The Big Sleep) ‘Have you got a McAvinchey Codex 2017, the Wigtown Edition with ‘America’ unitalicised on page 161?’ (if you have, it’s one of the first fifty printed).

Add to this the fact that juggling your text to fit within certain limits (in this case a maximum of 288 pages) and ensuring that you don’t have any ‘widows and orphans’ (in the sense of single lines left hanging on their own, on a separate page from their parent paragraph) leads to some off-the-cuff in-line editing – but the underlying satisfaction is always there: you are in charge of your own work. If a sudden improvement to the start of chapter 33 strikes you, then you can incorporate it, effectively creating a second edition and another puzzle for future Ph.D scholars in the field of 21st Century Literature.

I reckon it took about a month, on and off, to master InDesign sufficiently for what I wanted to do, but that was for an elderly gentleman starting from scratch; having now learnt it, I would reckon on a fortnight to produce a print-ready proof. There is a certain overlap between typesetting and printing the initial proof or trial copies – there’s nothing like putting something into print for helping you spot mistakes.