The Bookshop in November – Photo by Shaun Bythell

Some time towards the end of July it occurred to me that it might be a merry jape to turn up at my friend Shaun Bythell‘s magnificent emporium, The Bookshop , in the course of the Wigtown Book Festival, clutching a number of handbound editions of The McAvinchey Codex and purporting to be either the fictitious author Mr Auberon ‘Bron’ Dawn or (if my American accent could not be plausibly sustained) his agent on this side of the Atlantic – in fact, I even had my daughter take a picture of me (suitably attired) for use in a press release: I had been stimulated by making a special edition for my daughter’s birthday but also reminded of the tedium that attends printing booklets on an inkjet printer that only prints one side at a time; add to that my experience with Adobe Acrobat’s mysterious (and insuperable) impulse to shrink text and it is no surprise that I decided to hand on the hard work of printing the innards to a professional, while reserving the enjoyable book-binding element to myself.

There was, as it happens, a printer locally, a long-established business that had been there since I was a boy (and probably well before) and it was only a short walk away; but although it was easy to reach, I had to steel myself to go.

I am a dreamer by nature, but I lack the bold spirit, and most of my dreams have remained just that – dreams (and now I am old – be warned, young reader!). To take the step of visiting a printer and outlining my idea to him – an idea that my saner (or more timid) self considered a bit mad – was to make the whole thing more real and less easy to go back on; which of course was why I had to do it – to commit myself.

So off I went across the Inch (Perth is famously the smallest town in Scotland, since it lies between two inches – the North and the South Inch, large expanses of grass) and told my dream. 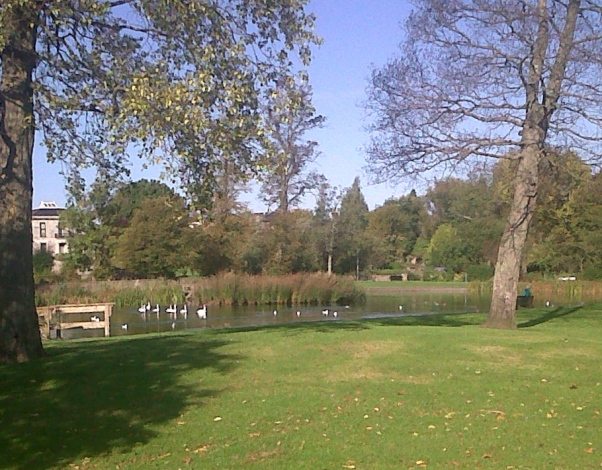 I outlined what I was thinking of, and asked for a range of quotes; I reckoned that the unit cost would drop beyond a certain point, so that a longer print run might be considerably more economical than a short one.

Lucy’s birthday edition ran to 240 pages, made up of 10 signatures or booklets of 24 pages each, i.e. six sheets of A4 with two pages per side, or four per sheet. I explained that I intended to bind them together myself into a book, so all that was required was for the booklets to be printed, folded and trimmed, but not stapled; I reasoned that a printer would be set up to do the folding and trimming to a better standard than I could.

(If you fold six sheets of paper together, you will notice that the fore-edge is uneven – the inmost sheet will protrude beyond the rest, with the next slightly less, and so on: the difference between the outermost and the innermost being five thicknesses of paper. It doesn’t sound like much, but it’s enough to notice, especially when you bind several such booklets together. My notion was that by having the printer trim them beforehand, I would end up with a nice even fore-edge when ten were bound together to make a book)

The printer’s quote, which came a day or so later, was this:

25 Booklets = £60
50 Booklets = £90
100 Booklets = £135
200 Booklets = £225
Of these figures, only the last was of any real interest to me. 200 signatures equalled 20 books, and £225 meant a cost of £11.25 per book. I reckoned that I could reasonably ask £15 for a handmade edition (doubtless I could ask more, but I wasn’t sure of the standard I could reach) so that the question then became whether I could supply all the rest for £3.75 a copy, or a total of £75 (and even then I would only be recovering my costs).
It seemed unlikely, so I e-mailed back asking a quote for 500 and 1000 booklets, the equivalent of 50 and 100 books, in the hope that the unit price might be less. Perhaps he was not really interested; I also wondered if he had hoisted in that I wanted multiples of 10 different booklets, which I was sure must affect the cost. In any case, he made no reply.
But the visit had served its purpose: the dream, having been given public expression, was now a step or two nearer to realisation. Rather than allow myself to be put off by the cost, I fell to pondering how else it might be done.
[click here for full List of Contents]