Boris Johnson, whatever else he may be, is a wily creature. His Valentine’s Day attempt to woo us all to get behind Brexit is a typically guileful effort. It is presented as a magnanimous ‘reaching out’ to ‘Remainers’ along the lines of ‘let’s all pull together to make this happen’.  He wishes to persuade us ‘that Brexit is not grounds for fear but hope.’ His general style, as always, is one of bluff confidence. 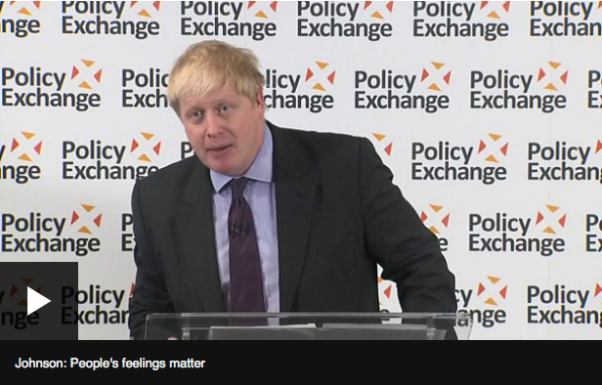 However, even the wiliest creatures do not always succeed in concealing their true feelings; sometimes they let slip rather more than they mean to.

And Mr Johnson is convinced that a second referendum will see this arithmetic expressed at the ballot box – in other words, that this time around, the majority will find their voice and say they do not wish to leave the EU.  Consider this excerpt from today’s BBC report:

‘Mr Johnson said holding another referendum on the UK’s membership of the EU – as some campaigners are calling for – would be a “disastrous mistake that would lead to permanent and ineradicable feelings of betrayal”.
“Let’s not go there,” he said.’
Look carefully at what he is saying here, at the place he does not want us to go: another referendum ‘would be a disastrous mistake that would lead to permanent and ineradicable feelings of betrayal‘.
Does he mean it would be a disastrous mistake if it confirmed the result of the first referendum? That those who voted to Remain would, for some reason, feel permanently and ineradicably betrayed were they to lose again? Surely not – if you have been beaten twice on the same issue, you are more likely to accept the result.
No. The only sense that can be made of Mr Johnson’s words is that the 38% of the electorate who voted to leave would feel betrayed if a second referendum showed that the majority of the British people did not wish to leave the European Union and it would be a mistake to let that happen. But whose mistake would it be, and by whom would the 38% feel betrayed?
The answer to both questions is Boris Johnson and his ‘Brexiteers’.
That is what Johnson’s speech is really about: he firmly believes (as, I would suggest, do most in the Brexit camp) that a second referendum can only result in a rejection of Brexit, at which point the mob will turn and rend him. It is not any concern for his country or even his party that drives him, but a deep personal fear. Hence his desperate pretence that the matter is already settled, that there is no going back, there is nothing to see here, move along and let’s all pull together to make a success of this (and save my skin)  – and do not, whatever you do, even entertain the possibility that you, the British people,  might get another chance to have your say on the matter:
‘Let’s not go there’
I disagree, Boris. By all means, let us go there. It is the only honest course.
[The situation bears a striking resemblance to the Tories’ attitude to a second Scottish referendum, which I discussed in The curious case of Toom Tabard and the Indyref Paradox]