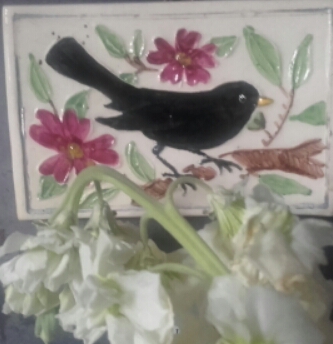 Its eye a dark pool
in which Sirius glitters
and never goes out.
Its melody husky
as though with suppressed tears.
Its bill is the gold
one quarries for amid
evening shadows. Do not despair
at the stars’ distance. Listening
to blackbird music is
to bridge in a moment chasms
of space-time, is to know
that beyond the silence
which terrified Pascal
there is a presence whose language
is not our language, but who has chosen
with peculiar clarity the feathered
creatures to convey the austerity
of his thought in song.

St Anselm was Archbishop of Canterbury and lived from 1033 to 1109 at the start of the intellectual renaissance that the High Middle Ages brought to Western Europe. It was a period of great intellectual ferment, an Age of both Faith and Reason, when the best minds of the day applied with passionate curiosity the learning they were rediscovering to the big topic of the day: God.

It takes some effort of the imagination in this secular age to realise that for the mediaeval mind, Theology was the Queen of Sciences, as exciting in its day as quantum physics is now. ‘What is God?’ is the question that the greatest of the mediaevals – one of the greatest intellects ever, Thomas Aquinas – asked at an early age and pursued the rest of his life.

The learning they were rediscovering had two principal strands, both of which had been kept alive elsewhere, since the Eastern Empire, centred on Constantinople, continued after the Western one, centred on Rome, had fallen, though increasingly encroached upon latterly by a new intellectual and religious power to the East and South: Islam.

The most immediately accessible strand, because it was written in Latin, was the neoPlatonism of the late Roman period, whose most notable exponent was Augustine of Hippo. Platonism, with its notion of a transcendent Reality composed of eternal, immutable Forms and a vision of Truth as a brilliant sun that is the source of all wisdom, is a good fit for Christianity – so little is needed to reconcile them that Plato (with the Christ-like Socrates as his literary mouthpiece) can seem almost a pagan prophet of Christianity.

The second strand was more difficult, because it took a circuitous route from the Greek-speaking Eastern empire through the Arabic of Islamic scholars (Avicenna and Averroes, principally) before being translated into Latin where the two cultures met in Spain. This second strand centred chiefly on the writings of Plato’s pupil, one of the greatest minds of any age, Aristotle.

It was Aquinas who met the challenge of reconciling this new influx of pagan (and heretic) thought into catholic teaching and did so with such effect that he remains to this day the chief philosopher of the catholic church, with his Summa Theologica his principal work*.

This period marks the second beginning of Western thought; its first beginning had been some thirteen centuries previously with the Classical Age of Greece, and the two giants, Plato and Aristotle. It is important to realise that what might seem at first glance a recovery of ancient wisdom was in reality nothing of the sort: it was the rediscovery of a new and startling way of looking at things, one that displaced and subjugated the traditionally accepted way of understanding our relation to the world that had held since time immemorial.

What made this new way of thought possible was the written word. For the first time, it was possible to separate one of the elements of human expression, speech, from the larger activity of which it was part, and give it what appeared to be an independent and objective form. This did not happen at once; indeed, it took about three thousand years from the invention of writing, around 5500 years ago, to the realisation of its potential in Classical Greece.

The word written on the page is the precondition of the relocation of meaning: from being a property of situations, inseparable from human activity and conveyed by a variety of methods, such as facial expression, gesture, bodily posture, with speech playing a minor role, meaning now becomes the property of words, and is deemed, by implication, to exist independently and objectively, and to be more or less fixed.

This one change is the foundation of modern thought: it is what allows Plato, with breathtaking audacity, to reverse the relation between the intellect and the senses and proclaim that what the senses tell us is mere Appearance, and that Reality is apprehended by the intellect – and consists of the world viewed from a general aspect: effectively, through the medium of language. It is the beginning of a world-view that casts us as detached spectators of an independent objective reality, a world-view that cannot be acquired naturally and instinctively, but only through a prolonged process of education, based on literacy.

This is straightforward enough, if you take your time and attend to the punctuation: the expression ‘that than which nothing greater can be conceived’ is Anselm’s definition of God; and even a simpleton, he says, can understand it; but to exist in reality is better than to exist merely in the imagination, so a God that exists in reality is greater than one which exists only in the imagination, so if God is that than which nothing greater can be conceived, then God must exist in Reality (Because that leaves no room, as it were, to conceive of anything greater).

Much has been said and written about this argument since it was first made over 900 years ago, but I want to concentrate on a single aspect of it, which is the continuity it implies between the human understanding and reality. To use an image, if we conceive the intellect as a skyscraper, then by taking the lift to its utmost height and climbing, so to speak, onto the roof, we arrive at Reality, the only thing that is higher than the height of our understanding.

This is what leads us to suppose – via the notion that we are created in the image and likeness of God – that God must be the perfection of all that is best in us; and if we esteem our intellectual faculties above all else (as, in the ‘West’, we seem to do) then God must be the supreme intellect.

This presents a problem, one that has considerable force in arguments against the existence of God: though a lesser intellect cannot fully comprehend a greater one, they share a great deal of common ground, and the greater intellect can certainly attune itself to the capacity of the lesser: this is a familar case (though not always!) between adult and child, teacher and pupil. Why, then, does God not deal directly with us at our intellectual level? Why doesn’t God speak our language? He surely would, if he could; yet he must be able to, since he is God – so the fact that he does not makes him appear either perverse (like a parent playing a cruel sort of game where he pretends not to be there, and does not answer when his child calls out to him, though he may do something that indirectly suggests his presence, like throwing a ball or making the bushes move) or absent, since he would if he could, but does not.

Thomas’s poem is an answer to this conundrum, though it is not a comfortable one. Perhaps our assumption that reality is at the top of the skyscraper is an error: maybe it is outside, at ground level. Maybe God speaks to us all the time, but we do not recognise the fact, because ‘God’ is quite other than we suppose, and cannot be contained in the intellectual framework that Plato and Aristotle have bequeathed to us.

This would explain on the one hand why religion – in its broadest sense – is bound up with immemorial ritual (which belongs to the world before Plato and Aristotle) and on the other, why, in an age that puts it confidence in intellect and reason – the ‘new thinking’ that Plato and Aristotle invented, not so very long ago in terms of our earthly existence – God is proving increasingly difficult to find.

*in the context of this piece, it is worth recalling that Aquinas on his deathbed said that his work now seemed ‘all so much straw.’