In a somer seson, whan softe was the sonne,
I shoop me into shroudes as I a sheep were,
In habite as an heremite unholy of werkes,
Wente wide in this world wondres to here.
Actually, I put on shorts and a hat against the strong sun, it being a glorious day, and set out on my strong bicycle (In this case, the 1915 Golden Sunbeam 2-speed). My purpose was to go East towards Dundee, a route I had not attempted in more than thirty years. Outside the Fergusson gallery I stopped for the now traditional bronze nude shot, with an almost Italian blue sky.

Then I went by the most direct route, carrying my bicycle up the steps and on to the railway bridge,

which afforded fine views of the Fergusson Gallery, once the waterworks, looking a little like something one might see in Istanbul, though the minaret is actually a chimney. 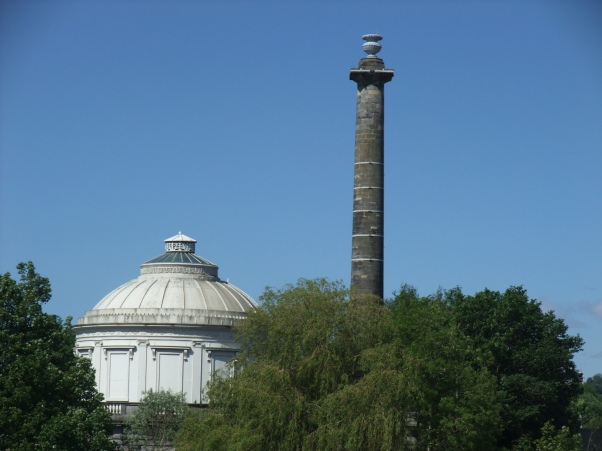 Fine views up and down the Tay, too , the tide quite low. There is a little beach at the upriver end of Moncreiffe Island, which the rail bridge crosses, and people were on it in bathing suits, so I suppose they were swimming in the river, probably in the backwater.
But June or not, there was still some snow visible on the hills

A train passed as I was crossing, on its way to Aberdeen via Dundee. I was a regular traveller on this line as a boy, as I lived in Perth but went to school in Dundee.

On the other bank is the Norie Miller Walk and Sculpture Park. Not all public art is of an equal standard, and I’ve always thought this a bit top heavy and unbalanced, though the white spiral looks well against the blue sky.

Cutting up a side lane I saw some fine hens, a sight that would delight my friends Stephanie Peppard (The Woman on a Yellow Bicycle) and Sarah (Compostwoman). 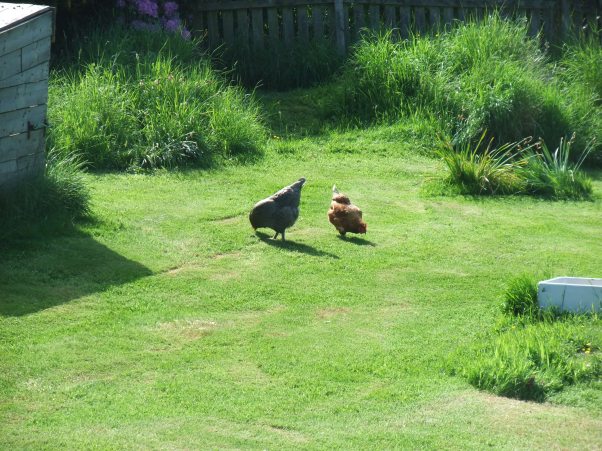 I paused at the top of the lane to look back

Then out onto the Dundee Road. The Eastward exit from Perth is very restricted – if you don’t take this road, you need to go round the back of Kinnoull Hill – the roads are pleasant but very hilly. In a car you can now cross the Friarton Bridge and bypass Perth altogether if you are coming from Edinburgh, Glasgow or Inverness.
In the old days, they profited from this restriction by charging a toll

No mention of bicycles!
Aside from the pleasure of the journey, I had a more serious purpose – I wanted to check out the route for my daughter, who plans to cycle from Edinburgh to Aberdeen for her sister’s wedding in Shetland in July. I was pleased to find that there is a usable footpath all the way out of Perth, so you avoid going on the A90, a road that is busy with fast and heavy traffic. You do have to ride alongside it for a bit, which is very noisy, but all right on a sunny day.
You start with a steady descent (which always makes you think what coming back will be like) which opens up one of the classic Perth views, Kinnoull cliffs with their built-as-a-ruin  tower  (far right in the lower picture) perched on them

then it levels out with a nice wee diversion through Walnut Grove  (mentioned in this sad ballad by local poet William Soutar) before  a longish stretch alongside the A90. You are briefly diverted up and over a slip road for Kinfauns but once you reach the next junction, for St Madoes  and Inchyra, you can bid farewell to the A90 and go by pleasant country roads. I did note a little wistfully that the Glencarse Hotel was just across the bridge on the other side of the A90, but I pressed on in the sure and certain hope that I could get a pint in Errol, some 4 miles on. 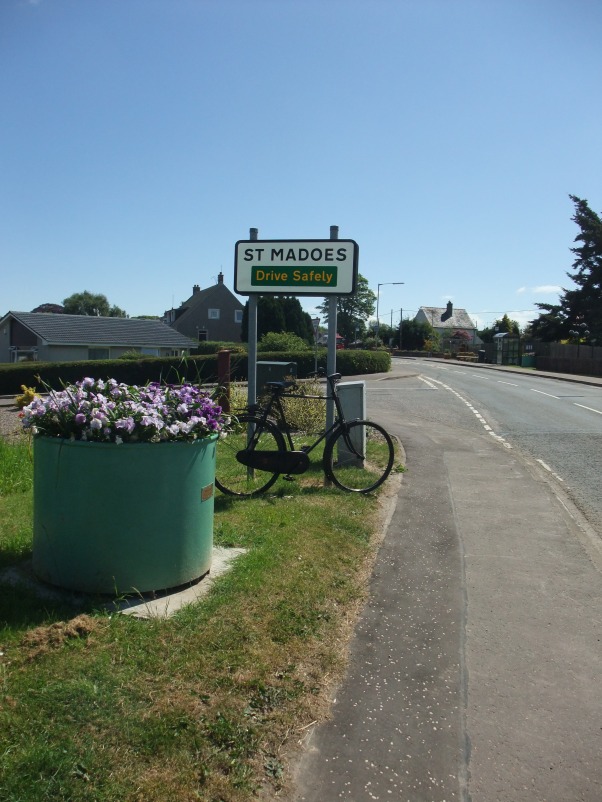 St Madoes is a pretty place, with a giant owl

Then on the road out – a long straight level stretch, so a bit dull, but relieved by the green fields and the bright weather –  there is a fine stretch of flower-clad wall

and then you encounter some holidaymakers from Easter Island

but there is also a rewarding (if distant) view of the celebrated Tay Rail Bridge, scene of the famous disaster,  awfully memorialised in McGonagall’s verse

and then you are on the High St looking in vain for a place of refreshment…
The best thing I found was this fine Ceanothus, but outside a health and beauty salon, not a pub.

I took a different road out and went by Inchcoonans, but there were no pubs there either, so I resolved to find the Glencarse hotel that I had noticed earlier. After a time the footpath stopped and resumed on the other side of the A90, which I had to cross on foot. This took a bit of time as it carries a lot of fast-moving traffic, but at length some gaps appeared. As I rode along the footpath on the other side, what I had feared from the outset came to pass: my hat blew off. Fortunately it landed on the verge and not in the traffic
Going on, I went by Glendoick, resisting the temptation to head off through the hills. After a bit more cycling on old roads parallel to the A90, I arrived with great delight at the Glencarse Hotel. My blessings on that house!
A pint of Guinness and a ham sandwich were just the thing to recruit my nervous strength, as the Victorians would say, and after some pleasant conversations with strangers prompted by the bike, I headed homeward by much the same route as I came, pausing to
take in a pleasant reach of the Tay

then speak to a young Frenchwoman who was hitchhiking to Inverness, and to look at the less well known of Perth’s two towers, the Binn Tower. This has considerable presence and when my brother and I visited in our Tolkien-reading youth its sudden apparition in a clearing in the wood reminded us of the Necromancer’s Tower in Mirkwood, so that even now, catching sight of it, I mutter ‘Dol Guldur’. I believe at some point someone attempted to make it into a house (it was built as a ruin, to be picturesque, because the Tay was fancied to resemble the Rhine – well, it is a river, I suppose.)

And the hill I had worried about as I came out? Lo, it was nothing. All in all a very pleasant day. There is a link to the route on my Maps page, here MAPS

One thought on “Eastward Reconnoitre, Glorious First of June”