The memorable Eadweard Muybridge invented a number of things, including his own name – he was born Edward Muggeridge in London in 1830. He literally got away with murder in 1872 when he travelled some seventy-five miles to shoot dead his wife’s lover (prefacing the act with ‘here’s the answer to the letter you sent my wife’) but was acquitted by the jury (against the judge’s direction) on the grounds of ‘justifiable homicide’. He is best known for the sequence of pictures of a galloping horse shot in 1878 at the behest of Leland Stanford, Governor of California, to resolve the question of whether the horse ever has all four feet off the ground (it does, though not at the point people imagined). To capture the sequence, Muybridge used multiple cameras and devised a means of showing the results which he called a zoopraxoscope, thereby inventing stop-motion photography and the cinema projector, laying the foundations of the motion-picture industry.

Muybridge’s achievement was to take a movement that was too fast for the human eye to comprehend and freeze it so that each phase of motion could be analysed. It was something that he set out to do – as deliberately and methodically as he set out to shoot Major Harry Larkyns, his wife’s lover.

It is interesting to consider that something similar to Muybridge’s achievement happened a few thousand years ago, entirely by accident and over a longer span of time, but with consequences so far-reaching that they could be said to have shaped the modern world.

We do not know what prompted the invention of writing between five and six thousand years ago, but it was not a desire to transcribe speech and give it a permanent form; most likely it began, alongside numbering, as a means of listing things, such as the contents of storehouses – making records for tax purposes, perhaps, or of the ruler’s wealth – and from there it might have developed as a means of recording notable achievements in battle and setting down laws.

We can be confident that transcribing speech was not the primary aim because that is not something anyone would have felt the need to do. For us, that may take some effort of the imagination to realise, not least because we live in an age obsessed with making permanent records of almost anything and everything, perhaps because it is so easy to do so – it is a commonplace to observe that people now seem to go on holiday not to enjoy seeing new places at first hand, but in order to make a record of them that they can look at once they return home.

to serve as propaganda for the written word and emphasise how vital it is to write things down. One of the tricks of propaganda is to take your major weakness and brazenly pass it off as a strength (‘we care what you think’ ‘your opinion matters to us’ ‘we’re listening!’ as banks and politicians say) and that is certainly the case with this particular Latin tag: it is simply not true that the spoken word is lost – people have been remembering speech from time immemorial (think of traditional stories and songs passed from one generation to the next); it is reasonable to suppose that retaining speech is as natural to us as speaking.

If anything, writing was devised to record what was not memorable. Its potential beyond that was only slowly realised: it took around a thousand years for anyone to use it for something we might call ‘literature’. It is not till the classical Greek period – a mere two and a half millennia ago (Homo sapiens is reckoned  at 200,000 years old, the genus Homo at 2.8 million)  – that the ‘Muybridge moment’ arrives, with the realisation that writing allows us to ‘freeze’ speech just as his pictures ‘froze’ movement, and so, crucially, to analyse it.

When you consider all that stems from this, a considerable degree of ‘unthinking’ is required to imagine how things must have been before writing came along. I think the most notable thing would have been that speech was not seen as a separate element but rather as part of a spectrum of expression, nigh-inseparable from gesture and facial expression.  A great many of the features of language which we think fundamental would have been unknown: spelling and punctuation – to which some people attach so much importance – belong exclusively to writing and would not have been thought of at all; even the idea of words as a basic unit of language, the building blocks of sentences, is a notion that only arises once you can ‘freeze’ the flow of speech like Muybridge’s galloping horse and study each phase of its movement; before then, the ‘building blocks’ would have been complete utterances, a string of sounds that belonged together, rather like a phrase in music, and these would invariably have been integrated, not only with gestures and facial expressions, but some wider activity of which they formed part (and possibly not the most significant part).

As for grammar, the rules by which language operates and to which huge importance is attached by some, it is likely that no-one had the least idea of it; after all, speech is even now something we learn (and teach) by instinct, though that process is heavily influenced and overlaid by all the ideas that stem from the invention of writing; but then we have only been able to analyse language in that way for a couple of thousand years; we have been expressing ourselves in a range of ways, including speech, since the dawn of humanity.

When I learned grammar in primary school – some fifty years ago – we did it by parsing and analysis. Parsing was taking a sentence and identifying the ‘parts of speech’ of which it was composed – not just words, but types or categories of word, defined by their function: Noun, Verb, Adjective, Adverb, Pronoun, Preposition, Conjunction, Article.

Analysis established the grammatical relations within the sentence, in terms of the Subject and Predicate. The Subject, confusingly, was not what the sentence was about – which puzzled me at first – but rather ‘the person or thing that performs the action described by the verb’ (though we used the rough-and-ready method of asking ‘who or what before the verb?’). The Predicate was the remainder of the sentence,  what was said about (‘predicated of’) the Subject, and could generally be divided into Verb and Object (‘who or what after the verb’ was the rough and ready method for finding that).

It was not till I went to university that I realised that these terms – in particular, Subject and Predicate – derived from mediaeval Logic, which in turn traced its origin back to Aristotle (whom Dante called maestro di color che sanno – master of those that know) in the days of Classical Greece. 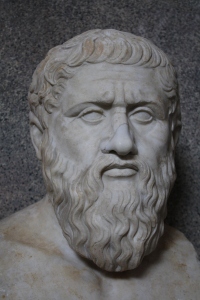 Aristotle is the third of the trio of great teachers who were pupils of their predecessors: he was a student of Plato, who was a student of Socrates. It is fitting that Aristotle’s most notable pupil was not a philosopher but a King: Alexander the Great, who had conquered much of the known world and created an empire that stretched from Macedonia to India by the time he was 30.

That transition (in a period of no more than 150 years) from Socrates to the conquest of the world, neatly embodies the impact of Classical Greek thought, which I would argue stems from the ‘Muybridge Moment’ when people began to realise the full potential of the idea of writing down speech. Socrates, notably, wrote nothing: his method was to hang around the market place and engage in conversation with whoever would listen; we know him largely through the writings of Plato, who uses him as a mouthpiece for his own ideas. Aristotle wrote a great deal, and what he wrote conquered the subsequent world of thought to an extent and for a length of time that puts Alexander in eclipse.

In the Middle Ages – a millennium and a half after his death – he was known simply as ‘The Philosopher’ and quoting his opinion sufficed to close any argument. Although the Renaissance was to a large extent a rejection of Aristotelian teaching as it had developed (and ossified) in the teachings of the Schoolmen, the ideas of Aristotle remain profoundly influential, and not just in the way I was taught grammar as a boy – the whole notion of taxonomy, classification by similarity and difference, genus and species – we owe to Aristotle, to say nothing of Logic itself, from which not only my grammar lessons but rational thought were derived.

I would argue strongly that the foundations of modern thought – generalisation, taxonomy, logic, reason itself – are all products of that ‘Muybridge Moment’ and are only made possible by the ability to ‘freeze’ language, then analyse it, that writing makes possible.

It is only when you begin to think of language as composed of individual words (itself a process of abstraction) and how those words relate to the world and to each other, that these foundations are laid. Though Aristotle makes most use of it, the discovery of the power of generalisation should really be credited to his teacher, Plato: for what else are Plato’s Ideas or Forms but general ideas, and indeed (though Plato did not see this) those ideas as embodied in words? Thus, the Platonic idea or form of ‘table’ is the word ‘table’ – effectively indestructible and eternal, since it is immaterial, apprehended by the intellect rather than the senses, standing indifferently for any or all particular instances of a table – it fulfils all the criteria*.

Which brings us to Socrates: what was his contribution? He taught Plato, of course; but I think there is also a neat symbolism in his famous response to being told that the Oracle at Delphi had declared him ‘the wisest man in Greece’ – ‘my only wisdom is that while these others (the Sophists) claim to know something, I know that I know nothing.’ As the herald of Plato and Aristotle, Socrates establishes the baseline, clears the ground, as it were: at this point, no-one knows anything; but the construction of the great edifice of modern knowledge in which we still live today was just about to begin.

However, what interests me most of all is what constituted ‘thinking’ before the ‘Muybridge Moment’, before the advent of writing – not least because, whatever it was, we had been doing it for very much longer than the mere two and a half millennia that we have made use of generalisation, taxonomy, logic and reason as the basis of our thought.

How did we manage without them? and might we learn something useful from that?

*seeing that ideas are actually words also solves the problem Hume had, concerning general ideas: if ideas are derived from impressions, then is the general idea ‘triangle’ isosceles, equilateral, or scalene or some impossible combination of them all? – no, it is just the word ‘triangle’. Hume’s mistake was in supposing that an Idea was a ‘(faint) copy’ of an impression; actually, it stands for it, but does not resemble it.

2 thoughts on “The Muybridge Moment”