It being as fine an Autumn day as you could wish for, I set out on my hundred-year-old bicycle to take a turn about Perth, pausing only to admire the details that never fail to give me pleasure on my 1915 Golden Sunbeam, such as the parallel seat stays, the gold-leaf embellishment, the noble proportions of the 26″ frame: 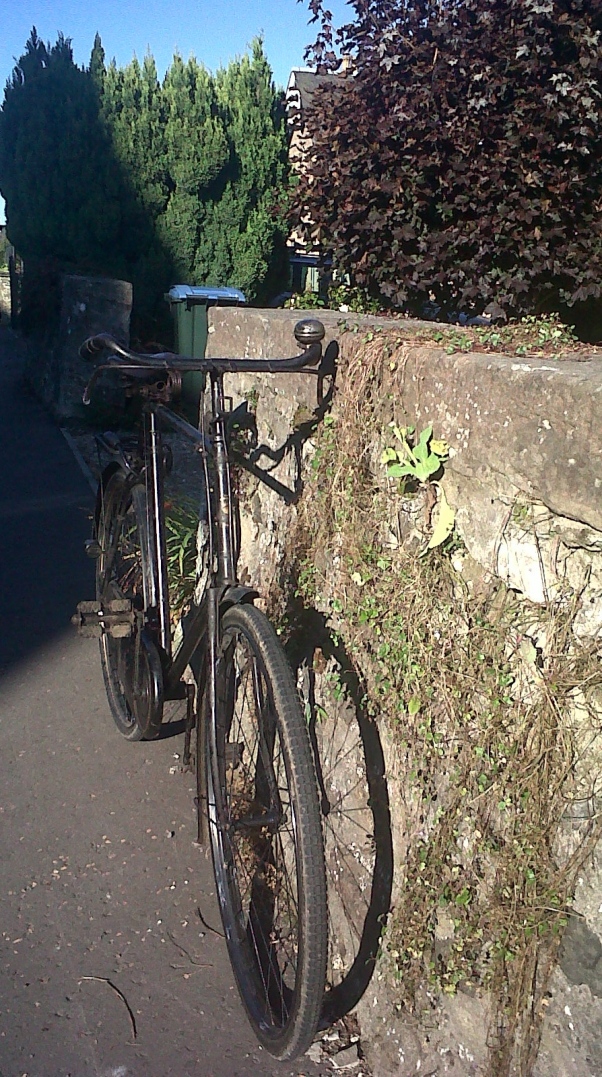 My chosen route has become a favourite – with only a slight climb at the start, it offers a circular tour round the outskirts of Perth in a clockwise direction, almost entirely off road and largely downhill or level – I first wrote about it here and the map can be found here: link.

Every season has its delights, but I suppose most people have their personal favourite; mine is Autumn. That may be because it’s the season of my birth, but I think it has more to do with leaving home for the first time to go to University – Edinburgh, in my case. Even now, a visit there at this time of year induces a powerful nostalgia.

One of the delights of Autumn is the lower angle of the light, which slants across paths and glances off the surface of streams, making strong contrasts between light and shade: 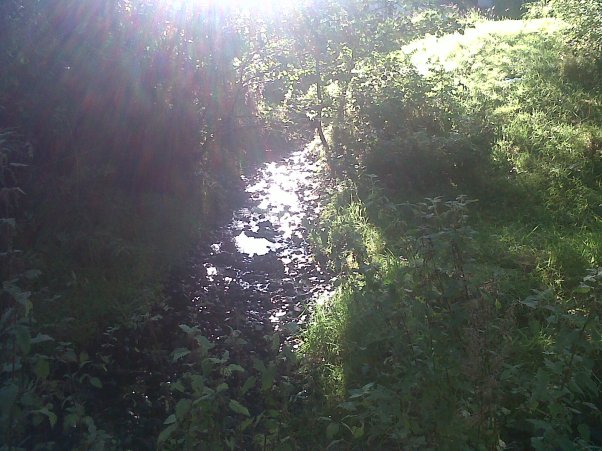 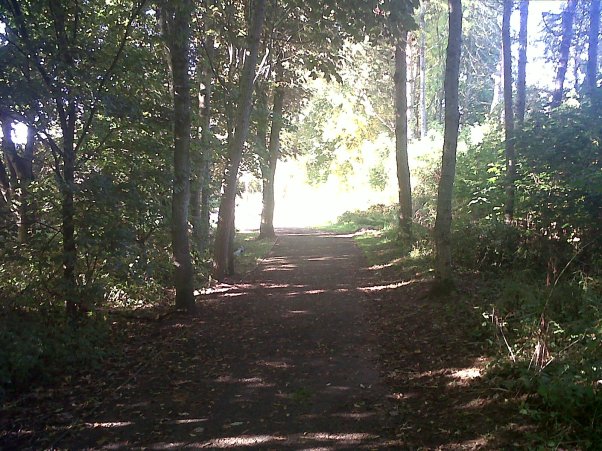 The path runs round Craigie Hill then picks up the line of the Scouring Burn as it runs into Perth alongside the Glasgow Road; a well made path flanked by trees runs through a residential area to the splendidly-named Western Edge, where it turns North and you gain some fine views of the distant hills from the vicinity of the improbably titled Noah’s Ark golf-driving range and go-kart track. 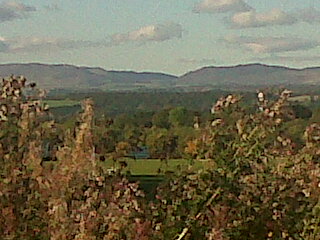 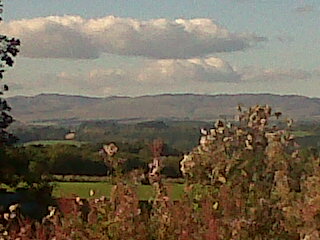 Past Noah’s Ark the track is rougher, in places at this season deeply puddled and thick with glaur, but that only serves as a reminder that imperial roadsters like the Sunbeam were  conceived at a time when roads were rougher as a rule and are well-equipped to cope, with their big 28 × 1½” tyres, fully-enclosed oil-bath chain cases, well-sprung saddles and relaxed frame-angles.

after a little way travelling westward along the track of Old Gallows Road, we turn North towards the vale of the Almond, a steady descent by narrow paths overhung with trees and bushes: 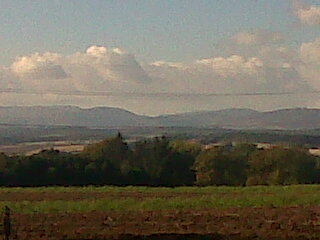 the path runs on in shadow for a time 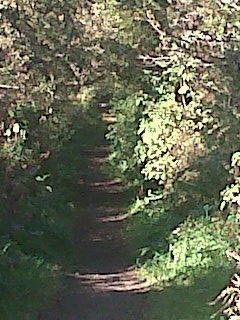 before opening up again to the West, with fine views of the hills and a distant moor burning, the sunlight striking a distant castle, and splendid autumn trees ahead 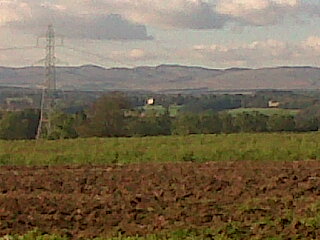 the path now becomes a well-surfaced private road (albeit with grass down the middle, Stephanie Peppard!). There is a sign I really ought to have photographed, asking literate horses to keep off the verge. This track leads down to the main road, where you cross the A85 to Crieff and dive down a little side road leading to the Huntingtower Hotel, where a prominent clocktower draws the eye 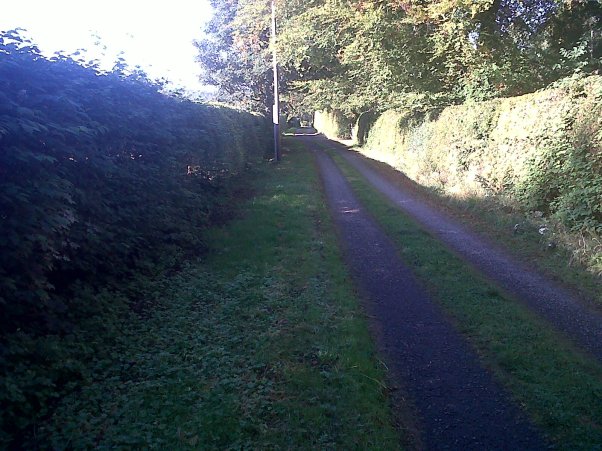 down nearer the clocktower the sound of running water suggests the proximity of the lade, and after initially overshooting, I turn back and find the narrowest navigable path running into the woods then over the waters by a wooden bridge

The path emerges at the start of the lade, the little waterway that contributed so much to Perth’s fortunes – over eight centuries ago, someone had the shrewd idea of cutting a channel to take water from the Almond and running it through the town, powering several mills, before it debouched into the Tay.

From here there is a very fine and pleasant cycle along the Almond towards its confluence with the Tay, so fine in fact that I scarcely stopped to take any pictures, though there are others that show this section in earlier posts

Once the Tay is joined, the path runs alongside the river that is the longest in Scotland and the largest in Britain (by volume) with fine views across to the well-situated houses on the farther bank, while on the right hand side the North inch is an expanse of sunlit green 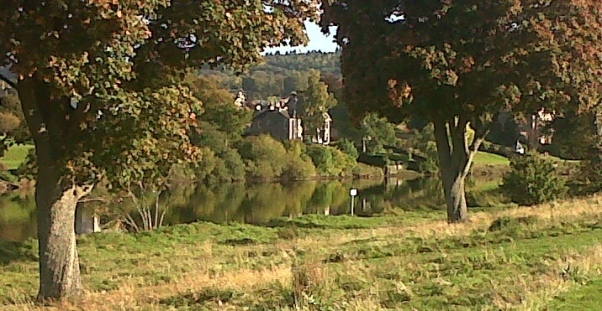 From there, you pass under the bridge that was built before the United Sates came into existence, and along the broad pavement of Tay Street, with its interesting sculpture 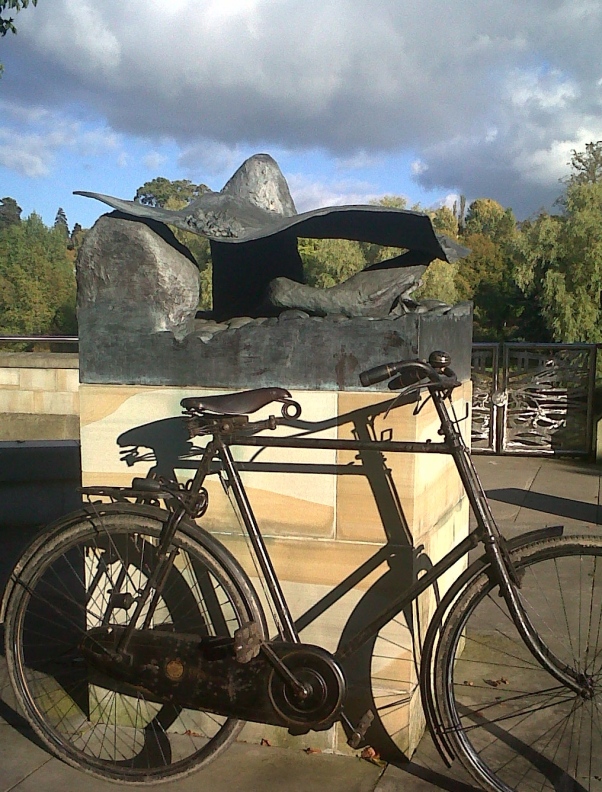 culminating in the fine John Duncan Fergusson Bronze  outside the old waterworks, now the Fergusson Gallery, dedicated to his works and those of his wife, Meg Morris

Then home across the green expanse of the South Inch. An excellent excursion!