(for the map of this route, click here)
The best excursions, like the best parties, are impromptu.
When you are lazy and idleminded, and prone to melancholy (I am all of these things) then not having to do things generally means not doing them. I work at home (or not, as the case may be). Consequently I do not have to ride my bicycle and all too often I do not. But today it was self-evidently Spring – as ee cummings puts it
in Just-
spring          when the world is mud-
luscious the little
lame balloonman
whistles          far          and wee
So off I went without thinking too hard about it: the great thing is to get down there and get out, to take yourself by surprise, as it were. The mount of choice (the one nearest the door) was the 1934 Royal Sunbeam:

I went by one of my usual routes, ducking down the little lane, through the tree-lined square, up the hill to the start of the path round Craigie hill: 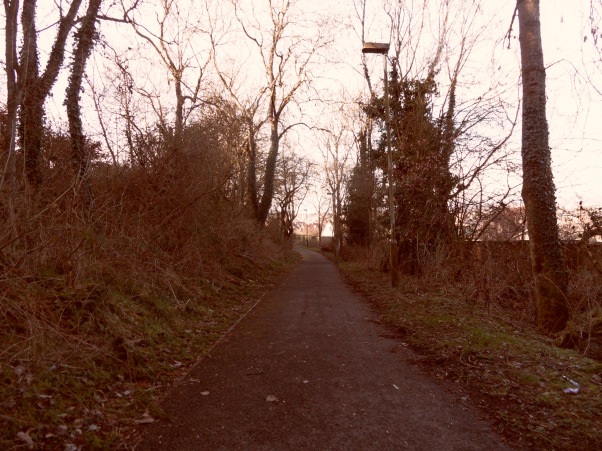 as I have remarked before, Perth is  well-provided with cycle paths. My plan today – as far as I had any –  was to pick up a path I had followed some way on foot the day before. This runs westward out of town, following the line of the Glasgow road, but screened from that busy thoroughfare by trees and bounded by the Scouring Burn, which runs in from the country and becomes a waterfall near the end of our street. Although the path runs at the foot of a hillside of housing (it was green fields when I was a boy) it retains a pleasingly rural feel, with wooden bridges at several points that give access to the houses across the stream: 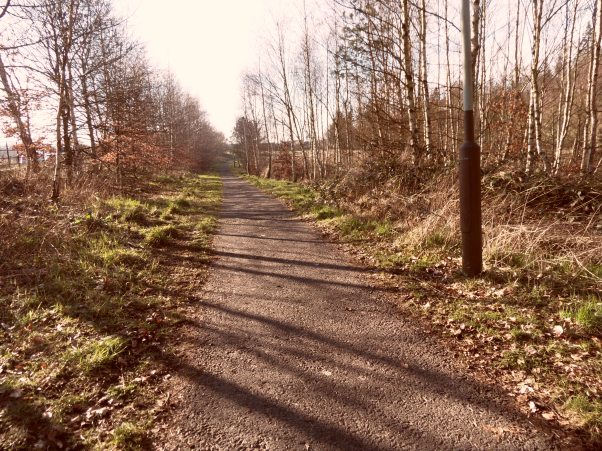 I had a dim recollection of having cycled this path before, but could not recall the details nor how far I had gone, so that gave it an adventurous feel. I was also (being a slothful sort) curious to see how far I could go without encountering any serious hills. I had a notion that the path ran for a good way alongside the burn, so skirting the hillside to the right, at the top of which is the house where I grew up; but I reckoned that sooner or later I would be in for a climb. However, I was wrong: when I eventually swung away from the burn in a northerly direction, I found myself in a little park with the ground falling steeply away from me:

There was a fine view to the hills.

I was now in familiar territory transformed: I  knew this area well as a boy, when it was very much a country walk, often enjoyed in the company of my father and immediate older brother; but now it is built up and residential – to the extent that what we had always known as ‘Old Gallows Road’ is now coyly renamed ‘West Mains Avenue’ – or at least the portion with houses is. I suppose addresses do matter to some people, but all the same, I feel such obliteration of history is a loss. When we were young I always supposed – for no better reason than that we walked that way setting out – that the gallows would have been at the end of the road somewhere out in the country; it was only on more mature reflection that I realised they must surely have towards the town, almost certainly on the Burgh Muir (Town Moor) that gave its name to the district where our house was, on top of the hill. (Must see if I can confirm that from a map.)

The metalled portion of Old Gallows Road takes you past an Electricity Sub Station, beyond which (of old) it became a rough track. Now it crosses the Western Edge Bypass that connects the Broxden and Inveralmond roundabouts, allowing the A9 to bypass Perth on its way North, and brings you to the improbably-named Noah’s Ark Golf Driving Range. However, the old track survives, a public right of way, a bit nearer to the rough condition I remember:

I was curious to go out this way because some years ago (seven, in fact – eheu fugaces labuntur anni) I had mooted it as a possible entry to Perth, when I cycled down from Inverness (where I lived in those days) on my 1924 Royal Sunbeam. In the event I did not use it but turned eastward and came in via the North Inch; but I wanted to see how feasible it was.

Once you have followed the track some way, you come to a path branching off to the right: it took me some moments to recognise it as ‘the boreen’ of our childhood days, as my father christened it – it is now a very neat, trim thoroughfare, making up in rideability what it may have lost in character. This was the route I could have taken seven years before. It was at this point that I began to form a more definite plan: the sign said Huntingtower; beyond that, I knew I could connect with the path along the Almond, part of National Cycleroute N77 which I have often followed in the other direction. 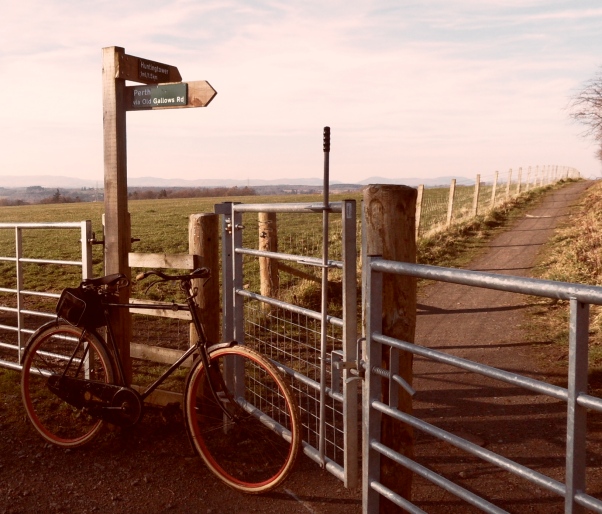 The quondam boreen takes you northward, descending steadily, with a fine open view to the hills. I paused to photograph a disintegrating mossy wall. 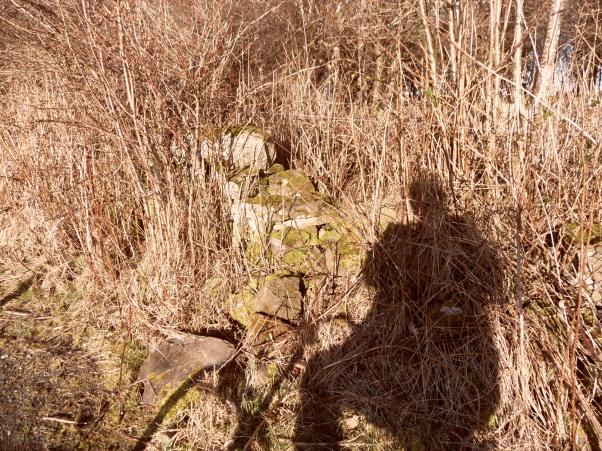 After a bit, the boreen plunges down through a tunnel of trees and emerges on the level with a fine beech hedges on either side, a bit dry and withered just now – I must make a point of coming this way again in other seasons to see how it looks: 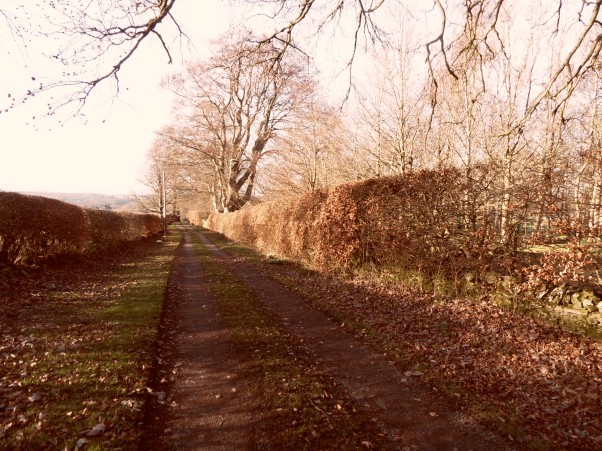 A short run along a minor road takes you to the Crieff road, which you cross in the direction of the Huntingtower Hotel. Running down towards the Almond you find place names that do recall the history of the place, in particular its local industry, which had much to do with dyeing and bleaching: there is a Bleachers’ Way and a Dyers’ Close, as well as a Clocktower Road, which must be named for this striking building – a school? a church? a house? I’m not sure:

Pressing on, I knew that I was near the Almond, but could find no obvious way; I nosed down a cul-de-sac and found a promising path heading off through the trees

I took it, expecting to go some distance, but came abruptly on the muddy riverbank path: 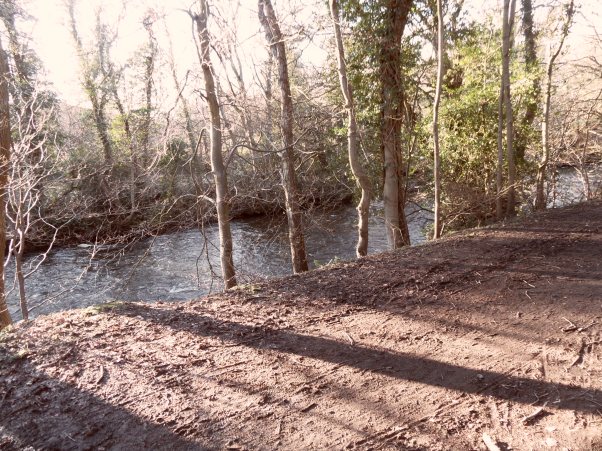 Proprioception – your sense of where you body is located in relation to its surroundings – accommodates itself to the vehicles we use: thus, in driving, we have the urge to shrink away if we pass close to another car, to duck if we go under a low bridge, to wince if we reverse into something (it isn’t just the thought of the repair bill – the slightest contact evinces it); it is as if we feel the limits of the car’s body as our own. Similarly, on a bicycle, there is an impulse to steer clear of mud and puddles as if we were stepping into them ourselves; I needed to remind myself that this was the very terrain the roadster bicycle was born to cope with. It is a common observation that the reason why French cars have such excellent suspension is that French roads were so bad at the time the motor car was evolving. Whether or not that is true of cars, it is certainly true of the roadster bicycle – its robust construction, large-diameter wheels, high bracket height and easy frame angles are all designed expressly to cope with the rough roads of late-Victorian and early-Edwardian Britain, in that brief golden age when cars were a rarity and the bicycle was the fastest way to travel on the road – easily tripling the range of a pedestrian and opening up whole new prospects of adventure.

It was not long before I found myself across the river from the cliff where in another season I had watched the martins flitting in and out, seen the toppled tree and wondered how soon its precariously-balanced companion at the top of the slop would join it; it hasn’t happened yet. 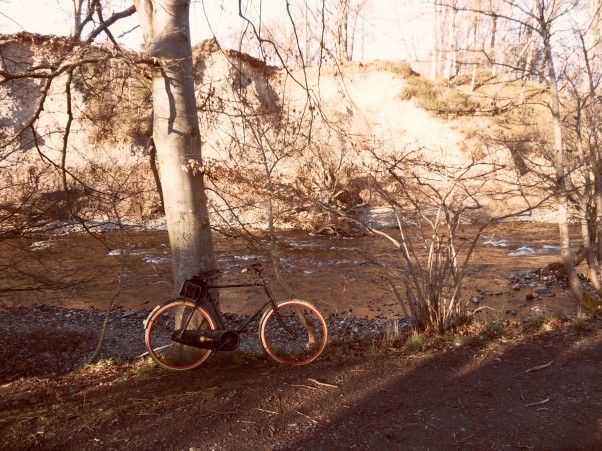 Now that I was riding eastward with the sun at my back, the interesting shadows I cast encouraged me to test the Theory of Relativity by photographing them while under way (don’t try this at home, children – Mama will not be happy if you ride across the persian carpet in the living room). They also called to mind some lines of Eliot:

(The lengthened shadow of a man
Is history, said Emerson
Who had not seen the silhouette
Of Sweeney straddled in the sun).

here’s another, this time with a bridge: don’t arches always look pleasing?

by the time the Almond met the Tay and the path turned South, I was becoming quite adept at the mounted shot: 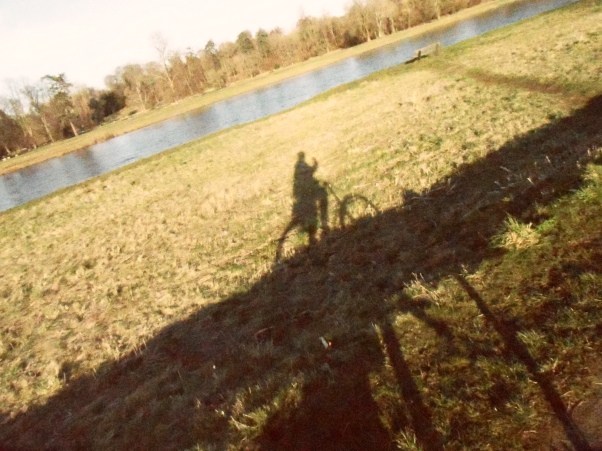 It has been a wet winter here, though fortunately for us not as wet as elsewhere – the flooding is picturesque rather than destructive, a nuisance only to golfers:

The scene above is part of a curious experience: what prompted me to stop and photograph it was that it called to mind Walter de la Mare’s poem As Lucy went a-walking – the association was strong and immediate, yet if you had asked me to explain it, I could not pin it down – the poem has a numbers in it, and witches, and for some reason I linked these four trees, singled out by being in the water, with the witches; it is only now, looking up the text of the poem, that I find these lines:

And, by and by, she comes to seven shadows in one place
Stretched black by seven poplar-trees against the sun’s bright face.

She looks to left, she looks to right, and in the midst she sees
A little pool of water clear and frozen ‘neath the trees;

Interesting that the words do not correspond (only four trees, and not, I think, poplars) but the image is similar – trees against the sun with long shadows and a pool of water at their foot; yet though seeing the trees recalled the poem, it did not consciously evoke the image, which I had forgotten. Curious how the mind works – and poetry.

When I was young we used to walk along the North Inch by the Tay and admire the big houses across the water: at that time it would have been my ideal to live in one, and have a boat I could put on the water from my own boat-house. I expect now I’d find it too big; nice for parties in the Summer, though.

From the Inch the path passes under the Old Bridge (which pre-dates the USA) and along Tay Street, where just before the railway bridge I came on an ominous site which I did not photograph: a clutch of emergency service vehicles – HM Coastguard, Fire Brigade, an ambulance command unit with a satellite dish – a quantity of red-and-white tape marking off the slipway to the river, numerous uniformed people milling about. Newspaper placards next day confirmed that a woman’s body had been recovered from the Tay near Moncreiffe Island. Alas! It is not easy to fall into the Tay accidentally round there. On such a beautiful day, too. Perhaps that was part of it. 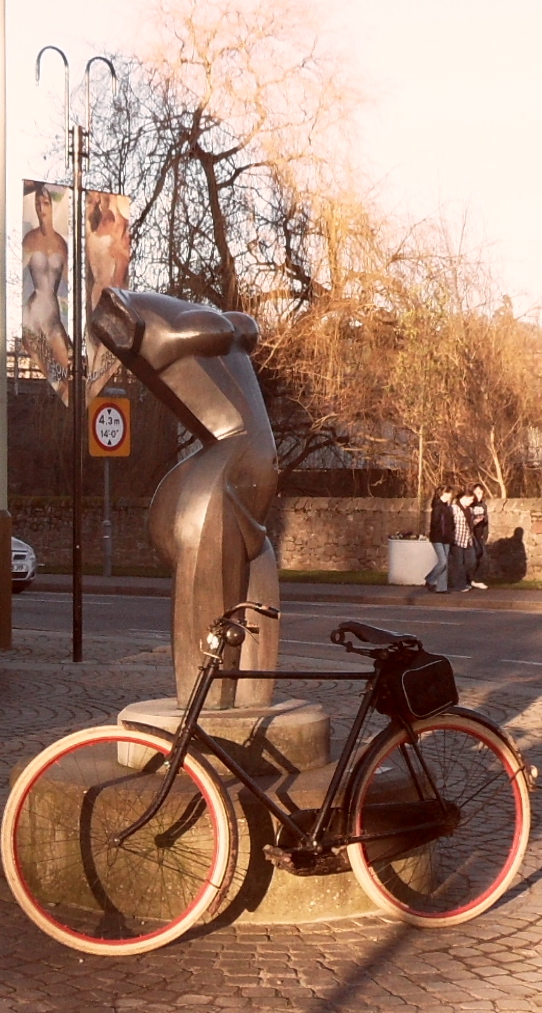 At the time, seeing a great number of other emergency vehicles in the Shore Road car park, I had hopes it might just be an exercise; but it was not.  After a brief halt outside the Fergusson Gallery, I headed home across the South Inch, turning once more towards the sun, with a final shot from in the saddle. 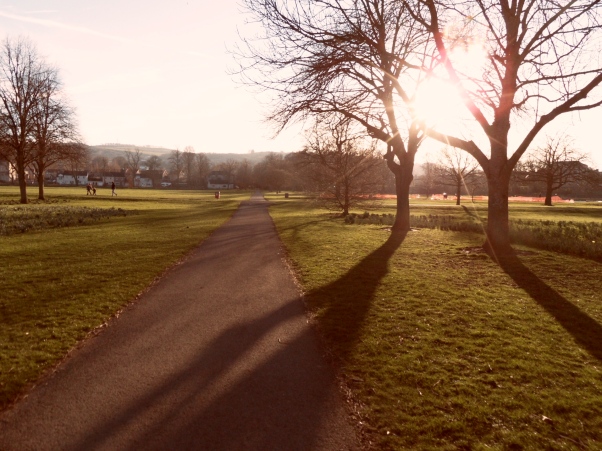