‘Metaphor: a figure of speech by which a thing is spoken of as being that which it only resembles, as when a ferocious person is called a tiger‘

Saddling metaphor with a definition like that (which is typical, even down to the threadbare example) is akin to giving it a criminal record – wherever it goes, it will never be trusted: what this definition says is that metaphor is essentially dishonest, at best an exaggeration, at worst a downright lie.

The crucial fault of this definition is that it prejudges the issue: the writer has already decided that a ferocious person is not and cannot be a tiger – he wants to insist on a world where tigers and people are separate and distinct, where that distinction between one thing and another is crucial, a matter of logic: A = A; B = B; therefore A does not and cannot ever equal B.

What metaphor points to is a world where tigers and people can overlap and merge, a world where resemblance and connection is more important than distinction and separation, where A and B can be the same. In other words – and this is a point of fundamental importance – metaphor indicates that logic does not furnish a complete or adequate description of the world.

(This might be likened to people who live in a city and have no understanding of country ways, or people who mistake their own land and culture for the entire world and think that ‘we don’t do that’ means ‘that isn’t done.’) 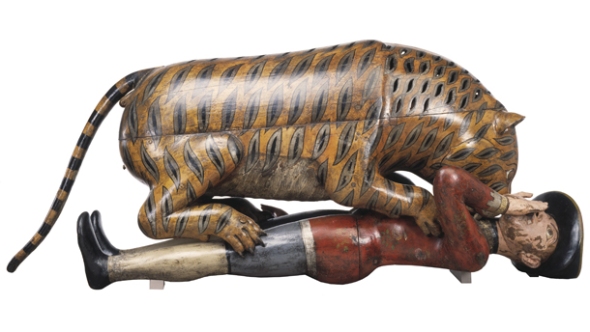 What is needed is a new definition, one that is not intrinsically hostile – I would suggest

‘Metaphor: a linguistic device which invites us to consider one thing in terms of another, to clarify or deepen our understanding; one of the key instruments of thought.’
(and for ‘simile’ I would simply say ‘a variety of metaphor’ because there is no importance in the difference between them)

What this definition makes clear is that metaphor is not only an honest enterprise, but an aid and a benefit to thought, something that improves our understanding; but it does more than that – by a slight shift in perspective, this definition does away with a world of mischief.

It prevents the grave error of supposing that the terms ‘symbolic’ and ‘metaphorical’ are opposed to ‘literal’, to their detriment – in other words, that only what is literal is true, and anything else is not – it is mere symbol, just metaphor. My definition does away with the fear that by describing something as ‘metaphorical’ or ‘symbolic’ we are denying that it is true – as such, it should be of great service to theologians.

There is such a thing as literal truth, but like logic, it deals with only one aspect of the world, and quite a small part of it. To have literal truth you must first have letters. By that, I mean that you must have the notion of language existing independently of speech. Speech is particular: the words spoken are mine, yours, someone’s. It is only when we make the great leap of giving speech permanent form through letters that the notion of language as something independent of individual speakers arises, and from that, the concept of literal truth.

Literal truth is not a property of the world, but of words – and strictly speaking, of written words, though in any literate society the spoken language is informed and mediated by its written form. Thus a written account, or a spoken account that can be transcribed (consider why we use court reporters to transcribe all that is said in a court of law) can be literally true, if there is a correspondence between what it says and what happened. If there is a disparity between the account and the event, then the account is judged to be false or untrue.

It should be clear from this that only a limited range of things can be true in this way – descriptions of events that set out to give an accurate account of what happened, such as we might find from a witness in a courtroom, or a reporter at the scene, or a description of an experiment in chemistry. (Other accounts – such as the report of a football match – may consist of a mixture of material, only some of which can be literally true – the score, the time of the goals, the names of the scorers, the teams – while the rest is judgement and opinion. One man’s gripping contest might be another man’s dour tussle; the fact that one team enjoyed seventy percent possession does not contradict the assertion that the other team dominated the game and played the better football – the fact about percentage possession may be literally true, but that the other team dominated the game is a matter of judgement)

Where such descriptions are untrue, some might be false while others might be inaccurate or mistaken – falsehood implies deliberate intent on the part of the reporter, who knows the true state of affairs but chooses to give an inaccurate account for some reason; on the other hand, a careless, inobservant or inexperienced reporter might simply be inaccurate – he failed to see all that was happening, or misinterpreted it; there was no intention to deceive.

‘Facts are chiels that winna ding an downa be disputit’ as Burns wrote; but the point I want to make here is that the realm of the factual is only a small part of our experience – opinion, thought and feeling cover a great deal more, and in that realm ‘truth’ has a different meaning that should not be confused with the correspondence between words and facts that is the definition of ‘literal truth’. There we speak of things ‘ringing true’ and apprehend truth as a quality found in a painting, a story, a piece of music, a poem; and having found it, we do not persuade others of its truth by argument, we simply point and ask ‘do you get it?’.

Verification is fine as far as it goes, but it does not go very far: there is no process for verifying the truth of King Lear or a Beethoven quartet. These are things that are understood in a different way; ‘truth’ means something else here. That is what makes disputes between science and religion so arid and pointless.

(in writing that, and casting about for a suitable analogy, I was reminded of Alan Garner’s story ‘Elidor’ which supplies the title to this piece – in it, the sacred objects that the children bring back with them – cauldron, sacred stone and spear – assume the mundane appearance of a broken teacup, a bit of rock and an iron railing. Concepts of great importance in one realm lose their significance when transported to the other)

3 thoughts on “‘Is there light in Gorias?’ – reflections on metaphor and truth”