My father had a way saying ‘Pah!’ that was peculiarly dismissive. He liked a good walk, so it seemed an odd thing for him to say,  but I think it was his very love of walking that made him say it. To walk ‘for exercise’ carries an overtone of duress, as if the person would sooner not be walking at all, but feels obliged to;  it is as if all possibility of enjoyment has been removed beforehand – ‘I only do this for the exercise, you know.’ It was the grudging attitude that my father contemned.

A recent excursion on the Dream Roadster  prompted that memory of my father:  it was a ride I did not enjoy, I think in part because it was undertaken grudgingly, out of a sense of duty. In an endeavour to bring some order to my chaotic existence I had resolved to adopt some regular habits, chiefly in relation to my writing. Among them was the resolution that I would make at least one cycle excursion per week and write it up here. By Thursday I still had not done it, and since the day seemed fair enough for the time of year, I forced myself out.

Cycling is often, for me, a deliberate antidote to the melancholic lethargy to which I am prone, so it is not unusual to have to chide myself into it: ‘you’ll feel better for having done it; you know you’ll enjoy it once you’re out there.’  It generally works, but not always (and I was interested to find Lovely Bicycle blogging on much the same point, here – could it be the time of year?). The day was bright enough, with flaring Autumn colours 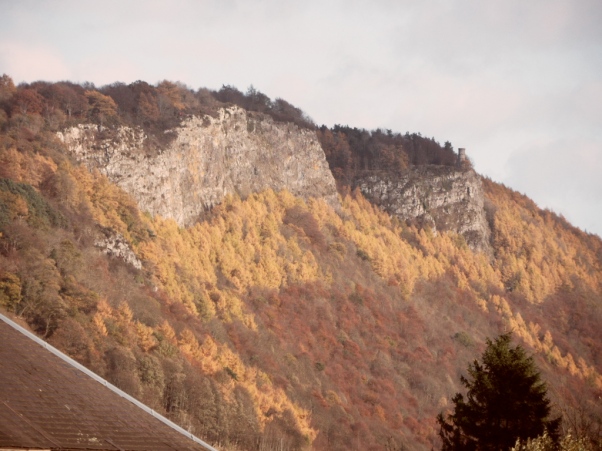 and I went by the usual secret paths 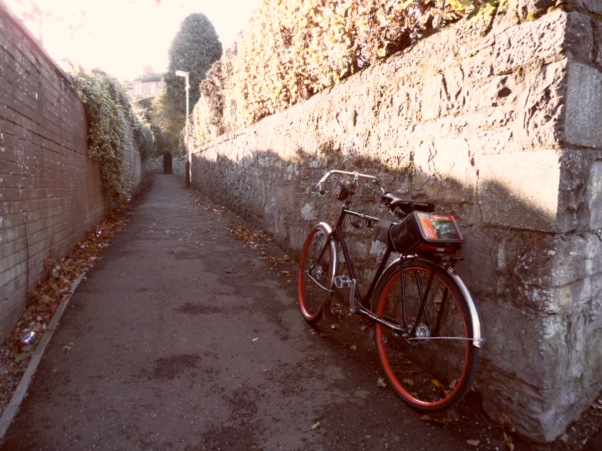 I rode up over the hill and down into Strathearn, pausing to admire the Earn on either side of the eponymous bridge:

but for all the beauty of the scenery the calmness of soul I was seeking (perhaps too determinedly) refused to manifest itself. Instead, I found myself annoyed with my bicycle: the saddle was not high enough, the handlebars were too low; it just didn’t seem right. Then there was the road: it was altogether too straight 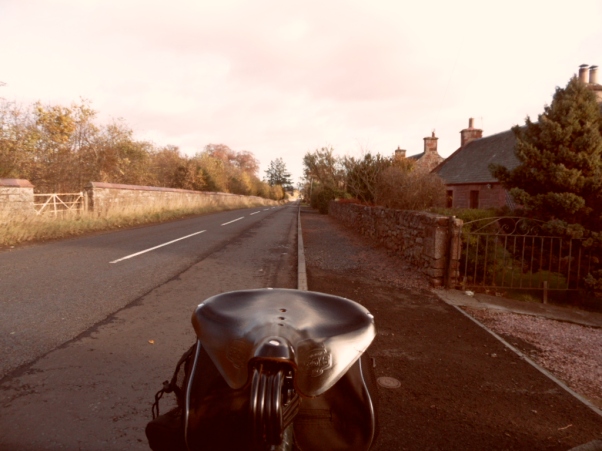 yet it was not easy cycling: for all the seemingly straight and level ground, I found I could not deploy my lordly hundred-and-fifty inch top gear and toiled along in the middle ranges.  Only gradually did it dawn on me that I was battling an invisible adversary: there was a steady headwind.

I am not a much of a man for getting wet – though there is a certain pleasure in defying the elements if you are dressed for it – but given the choice between wind and rain I think I would choose the latter. Rain is honest; wind is insidious. You know it more by its effects, as in this case, where a level ride seemed like toiling up a steady gradient. It is dispiriting; you are conscious of making less headway than you should, yet the cause is not apparent – it is not the wind you feel, so much as a resistance.

And having set out in what was not the best frame of mind, this soured my mood still further. Why was I doing this? Where was I going?

The answer to the second question was ‘nowhere in particular’ : I had resolved to investigate the road in the direction of Longforgan and Forteviot, partly as a scouting mission for some future attempt on the Ochil glens, though I did not think I would attempt the first opportunity for that, over the Path of Condie, which is steep and twisting. 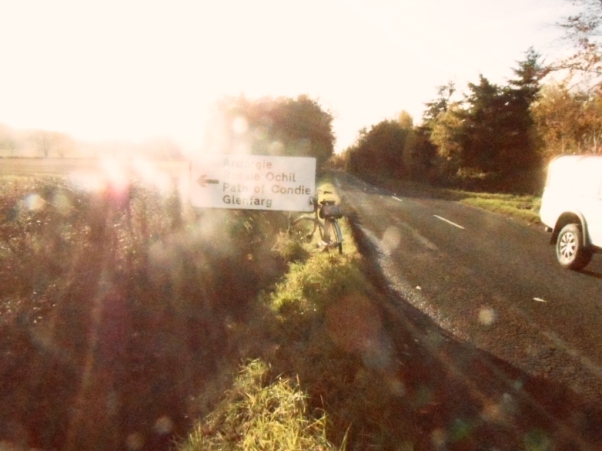 (While I was taking the picture (badly – I know) the white pick-up truck came past, stopped, then reversed to where I was. The driver peered out and laughed, saying he had mistaken me for someone else – ‘I thought I knew the only cyclist who would stop to take the picture of a road sign’. I assured him that every cyclist has the urge to take pictures of roadsigns. I wonder if that is true? I remember when we were young my brother and I mocked our father’s penchant for taking pictures of roadsigns on our Irish holidays; yet now it seems perfectly sensible: few views are so distinctive in themselves as to be instantly recognisable; there is nothing quite so local and particular as a roadsign)

I toyed with the notion of making a circuit by turning North across the railway line and joining the Aberdalgie-Craigend road that featured in my earlier excursions here  and here, but eventually I resolved that enough was enough: I would simply turn back. When the road swung round at the junction with the Invermay road,

I decided that the splendid view of the distant hills that opened up was reward enough for any outing.

Heading back with the wind behind me I was able at last to use my mighty top gear, and went bowling along at a swift pace while pedalling in a leisurely manner. An ample pavement allows traffic-free cycling from Bridge of Earn to the Craigton interchange, with magnificent Autumn colours 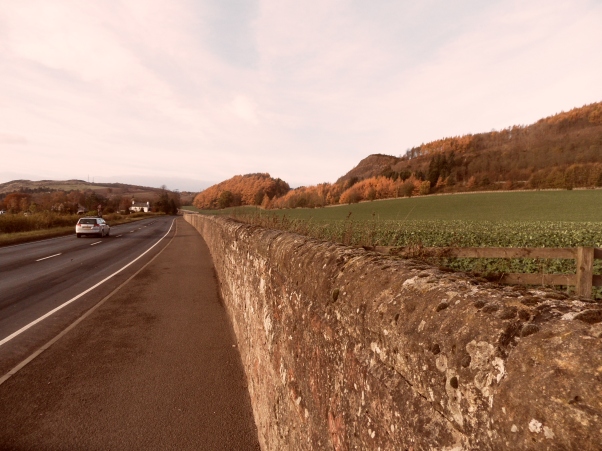 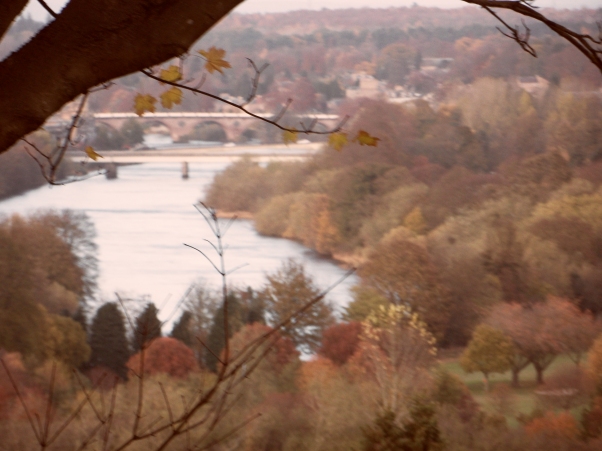 though in this case I was not quick enough to catch what had caught my eye, the unusual sight of a boat in mid-river – by the look of it, probably a semi-inflatable of the kind the fire service use.

So home at last, after a trip that seems pleasanter in remembrance than it was in reality, though that perhaps is because it is overlaid with the memory of one I have done since – just before writing this, in fact – which was altogether more satisfactory and uplifting. 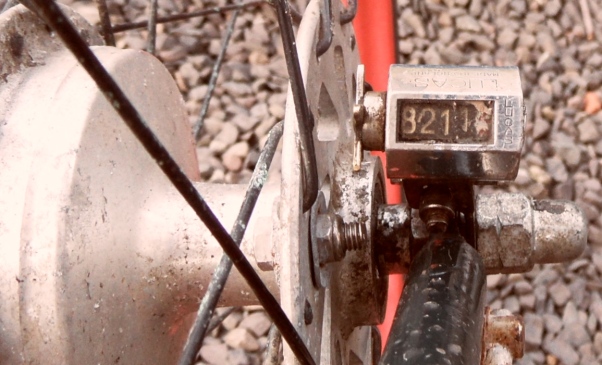 And later in the evening there was a splendid moonrise, pictured at the top.

The route for this journey is here.