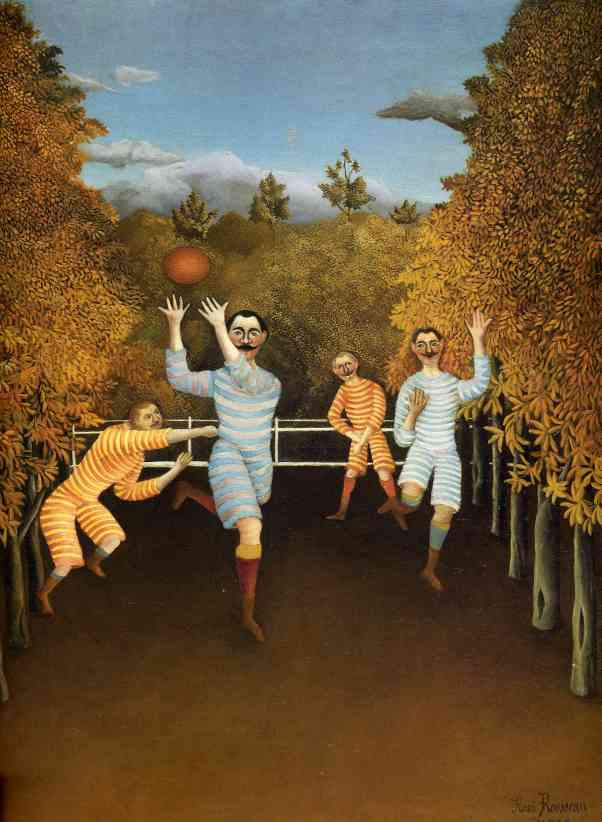 (The Football Players by Henri Rousseau)

Two people are arguing; one insists that you can score a drop goal in football, the other that you can’t. Eventually it emerges that the first is talking about rugby football, gaelic football and Australian rules; but the other means only association football.

So who is right? Once we know the context, that question no longer makes sense – we can say that if by ‘football’ you mean these particular codes, then it is right to say that you can score a drop goal; but if you mean only association football, then that is not the case. So what about the original question – can you or can’t you score a drop goal in football?

There is no absolute sense of ‘football’ in which the question makes sense, though it can at least be resolved; but if you asked ‘can you score a drop goal in chess?’ or ‘can you be offside in chess?’ it would be clear that you didn’t know anything about chess (you might be a foreigner who knows it is the name of a game and is trying to work out what kind of game it is).

Wittgenstein uses the terms ‘game’ and ‘way of life’ a lot in his discussion of language, and in particular of meaning. His central contention is that words have meaning only in context, only as part of a larger whole in which they stand in relation to other things; hence his dictum that ‘in most cases, the meaning of a word is its use in the language’.

To get the full force of what Wittgenstein is saying, you need to consider the position he is arguing against, which is that ‘meaning’ is something which the speaker imparts to a word by some kind of mental process, that when I make an utterance like ‘it is raining heavily’ there is some sort of parallel mental process that accompanies (and possibly precedes) my words. I suppose this arises from the idea that language is the expression of thought, which conjures an image of my thoughts forming a sort of mental cloud inside my head and my words having some correspondence to them, as if a line ran from each word to something in my mind.

(It is interesting, in passing, to see the spectre of Cartesian Dualism haunting that particular image)

But Wittgenstein’s argument is that this picture is simply mistaken and misleading and in fact unnecessary – we can explain how words mean perfectly well, indeed rather better, without having recourse to it. Meaning is a property, not of individual words, but of language, and not of some single over-arching language (an absolute ‘football’ in the terms of the argument above) but of a language made up of many different ‘codes’ or ‘games’ or ‘ways of life’.

A good dictionary illustrates this point, though at first sight it might seem to support the idea that words have fixed meanings in themselves. While a cheap dictionary will simply cite a single meaning, or a range of meanings if you are lucky, a dictionary like the OED will furnish a dated quotation to illustrate the earliest known occurrence of each particular meaning in use.

This is where another of Wittgenstein’s ideas comes into play. If I was asked what makes Wittgenstein a philosopher of the first rank, I would point to his wonderful ability for quietly upsetting apple-carts – in other words, his breathtaking capacity for demolishing received ideas of central importance without making any fuss about it. In this case, the received idea is the notion of ‘essence’, which goes back to Aristotle.

Again, this is something you learn early in philosophy, and it can be a powerful tool in argument: that whatever is called by a particular name has an essence, some quality or set of qualities that makes it what it is, a defining character which entitles it to that name, and excludes other things from having the same name applied to them.

The whole system of classification from general to specific, which we also owe to Aristotle, depends on this concept: that all the members of a particular class have something in common that makes them members of that class. This is such a powerful and useful tool, with such a wide application, that we can overlook the fact that it is only a tool and (mis)take it for an actual description.

Wittgenstein, without the least fuss, demolishes the concept of essences, offering instead two other ways of looking at it: family resemblances, and strands in a thread. He uses the first in relation to games, then the second as a development of that, in relation to number:

‘Consider for example the proceedings that we call “games”… what is common to them all? – Don’t say: ‘there must be something in common, or they would not be called “games”’ but look and see whether there is anything common to all.

I can think of no better expression to characterise these similarities than “family resemblances”; for the various resemblances between members of a family: build, features, colour of eyes, gait, temperament, etc. etc. overlap and criss-cross in the same way. – And I shall say: ‘games’ form a family.

And for instance the kinds of number form a family in the same way. Why do we call something a “number”? well, perhaps because it has a – direct – relationship with several things that have hitherto been called number; and this can be said to give it an indirect relationship to other things we call the same name. And we extend our concept of number as in spinning a thread we twist fibre on fibre. And the strength of the thread does not reside in the fact that some one fibre runs through its whole length, but in the overlapping of many fibres.’

This for me is a very liberating step, though perhaps that is only for those who have been in thrall to philosophy in the first place, in particular philosophy descended from Aristotle and Plato. It seems to me that as long as you have the concept of essence you are driven to the chimerical notion of some single order of reality at the back of everything which it then becomes the task of the philosopher to discover: the equivalent, in the argument we open with, of trying to find a single definition of ‘football’.

To dispense with, at a stroke, a single scheme of things into which everything must fit and replace it with a whole family of such schemes none of which can make an overarching claim seems to me a very healthy development and one that defuses a great deal of argument and eases a lot of tension. And there is another aspect of Wittgenstein’s concept of meaning that strikes me as potent and fruitful.

It occurs to me that there is a strong parallel between the concept of meaning defined by context and that of a character in a story, and that the two point to a third thing about our own ‘meaning’  as individuals in the world.

Meaning is not the property of a word; it is something that a word derives from the context in which it occurs, the language-game of which it forms a part, the way of life in which it is used, to use the Wittgensteinian terms. Similarly, a character in a story does not have a separate existence in his (or her) own right, but is defined in relation to the other characters and the action of the story – the story is the thing, if you like; the character is only a part.

(Of course you can play literary games and have Hamlet put in an appearance as Bertie Wooster’s house guest, but all you are really doing is inventing another form of football, as it were – you now have a third story, which features one character also found in Shakespere and another in Wodehouse; but you don’t reason from that that Hamlet and Bertie exist independently apart from the places where we find them)

Is it too bold a step to see ourselves in the same light? That our ‘meaning’ is derived from being part of a greater whole, rather than something we possess absolutely as of right? How compatible or incompatible would such a position be with other world-views, religious and otherwise? (I sense that the most strenuous objection would come from those who make a cult of individualism and advocate extreme self-reliance; from the wide range of others, not so much)

An interesting consideration, not least for the prospect it opens on the subject of personal boundaries and the limits of the self.
Follow COMPLEAT TROWZER on WordPress.com