This is an interesting lesson in communication – how can you receive a clear and definitive answer to a question and still doubt whether your question has been answered at all?

In the summer, as detailed here, I bought a handsome but anonymous saddle on eBay. Then the other day I came across this, in an online auction catalogue:

What struck me at once was the stamp on the side, with its ‘Greek key’ border and flanking pair of spoked wheels, which apart from the insert where the name appears, is almost identical to mine: 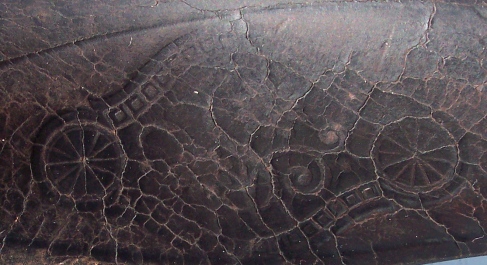 In addition, the unusual-shaped cut-outs are also strikingly similar, as is the small detail of the location of the rivets, along the face of rear edge rather than the top of it, as Brooks do:

Now Lepper are a Dutch company, still very much in the saddle-making business, so I e-mailed them some pictures and asked if they thought mine was also a Lepper saddle; and this morning received this succinct reply, which I reprint in its entirety:

‘This is a Lepper Drieveer 90 saddle’

So, mystery solved, then? Well, I am not so sure. The problem is that (thinking it might be helpful to present the evidence that had led me to my conclusion) I sent pictures of both the Lepper saddle on the auction site and my own, with the auction site picture first.

My suspicion is that the kind but busy folk at Lepper have looked only at the e-mail title (‘An old Lepper  saddle?’) and the first picture and identified that – for which I thank them, but it gets me no further forward. (“Drieveer’ is ‘three spring’, I believe, so does not help distinguish the two). It may be that I malign them, but I did send them a link to the original post and I notice that there has been no Dutch visitor in the time between my e-mail and their reply.

However, I do feel that the  similarities between the two are strongly suggestive of a common origin, but on the other hand it might be a case of deliberate imitation – the substitution of a decorative pattern for the (expected) firm’s name would point to that. On the other hand, mine is no shoddy article – it has been expensively made, and in one thing at least – the triple-wrought springs – it appears superior.

An interesting side note is the use of ’90’ to designate this style of saddle. It is used by Brooks, of course (originally just B90, then a range of models B90/1, /2 & /3, which I think varied slightly in size) and I am sure I have seen it on other British makes such as Wright and Middlemore. Did Brooks start it and the others follow suit, or is there some other reason for it?