The aesthetics of saddles are curious: a visit to eBay shows that old saddles (often well past their prime) command a lot of interest – yet in an age where retro sells, the principal maker of leather saddles (Brooks) is only slowly reviving their classic heritage… chestnut brown leather looks so much better than plain black; oval embossed stamps than angular ones; keyhole slots than plain holes, triple-wrought springs than single strand…. or is that just me? (my wife and I have observed a curious phenomenon – as soon as we get a taste for something at our local supermarket, it vanishes off the shelves, never to be seen again. This is almost unfailing. Perhaps we just have odd tastes).

Anyway, with the building of the Dream Roadster, the question of a suitable saddle soon came up. My beau ideal is the Brooks B90/3 (my daughter and I have two of the last ever made) though I have a soft spot for the B66, but I don’t like grained leather and I prefer keyhole slots. As it happened, I had a never-used B90/3 front spring and frame attachment (much like this, if not identical) plus various odds and ends of old saddles, including a nice Middlemores cover, long since detached from its other components:

One feature I rather liked was the integral eyelets for saddle-bag straps, with metal reinforcements. I had married it to spare B66 rear springs and undercarriage, though you may notice that the gap between the side-rails that takes the saddle clamp is rather wide… mark that.

The side stamp too was pleasing – worn yet retaining detail: Middlemores of Coventry – model B185,  think.

And the cover was in good condition,with elegant ventilation slots
(all this took place around Bloomsday, 16th June, which explains the copy of ‘Ulysses’ used as a stand)

from rear 3/4 it looked rather well… I had fitted the Middlemores nose-piece into the narrow gap in the Brooks spring by dint of some judicious hacksaw-work, filing, and hacking off bits of leather – a first-class bodge, in other words.

The  original Middlemores saddle had a conventional coil spring at the front (much like a Brooks B73) so that the nose projected beyond it, and was covered with a rather pretty extension to the cover, like a little leather trunk that curled down and round it. This was too wide to fit in the slot in the Brooks spring, and rather than cut it off, I thought to make a feature of it by whipping it to the spring with a spare bit of leather lace.

I am not much of a man for the old Fifty Shades, but I do think a little whipping in the right place looks rather well… (but you can already see the danger signs – look at the strain on that side nose rivet…) 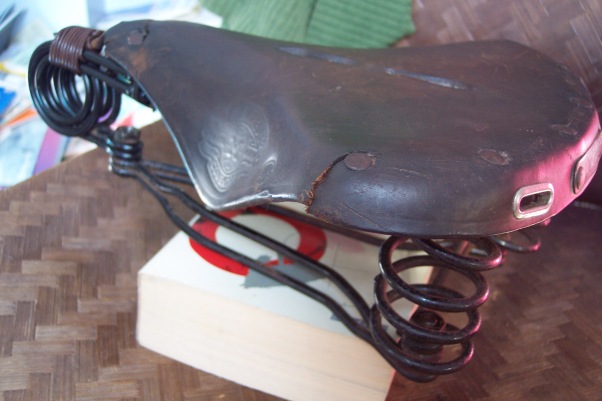 ..and here too, at the flare in the flank. The simple act of bolting the top part to the lower frame had put the steel side-rails under a fair bit of tension, and I think you can see that the strain is beginning to tell on the cover 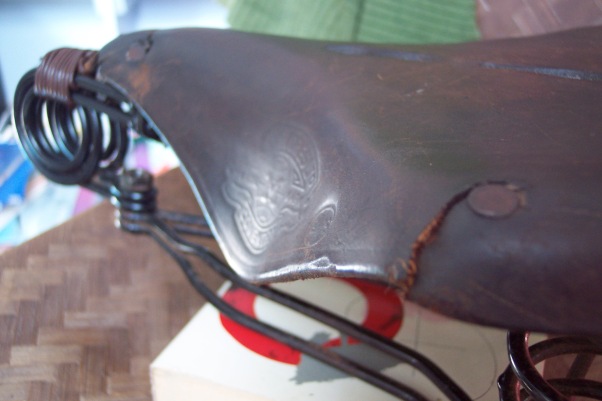 as is particularly evident here – this tear developed considerably as the saddle was assembled, but the final straw was fitting the seat-clamp – this drew the side-rails in much closer and greatly increased the tension, and by the time I had actually fitted the saddle to the bike it had begun to give way at the nose – it plainly would not stand the weight of a rider, so I reluctantly discarded it and substituted the B90/3 from the 1923 Royal Sunbeam.

Yet we learn more from failure than success: I feel I now have a better understanding of the powerful strains and stresses exerted by the saddle chassis on the cover, and how they are exacerbated by the process of assembly and tightening.