(for a map of this route, see here) 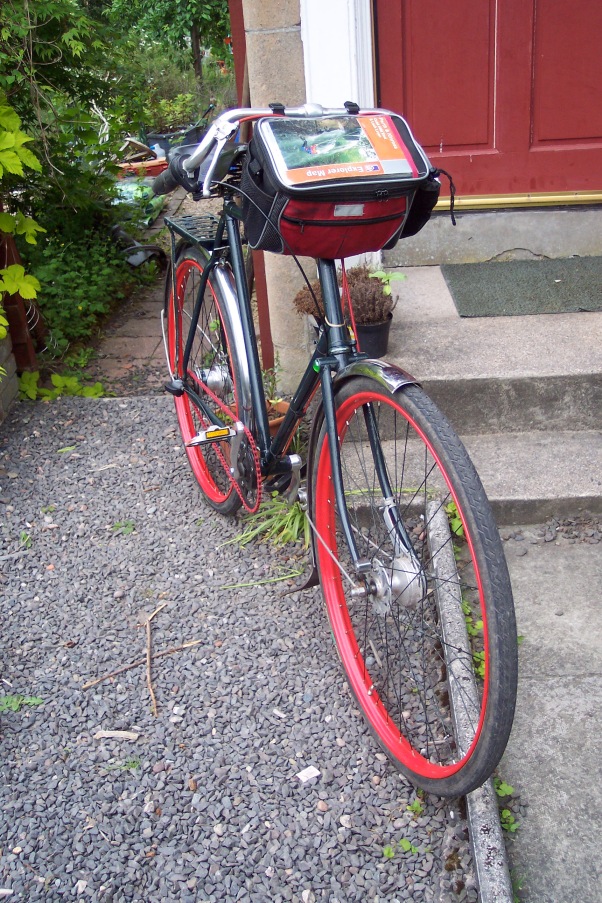 Ready for the off

This started inauspiciously: I set out intending to go over by Callarfountain into Strathearn, a fine rough path that would suit the roadster I thought, preceded by a stiff climb that would test the Mountain Drive (and me).

I didn’t get far – about a third of the way up Glenlochay Road in bottom gear – legs thrashing furiously – my chain snapped, so I had to turn and ignominiously wheel back to the house. This was one of the moments when a small incident becomes critical: Julius Caesar, landing in Britain, stumbled and measured his length on the shore, an event which must have drawn gasps of dismay from his men, for the Romans were great ones for omens and auguries – surely this was inauspicious? But shrewd Caesar, seizing a handful of soil, stood up and said ‘thus do I claim thee!’ (or some such) and there were smiles all round.

Examining my chain, I saw how easily I could make this an excuse for sticking the bike back in the shed and going off to do something else: it wasn’t meant to be, leave it for another day (I have to say at this point that I have a history of disappointment with the Mountain Drive, which I’ll discuss elsewhere, but which undoubtedly fed into this moment). But closer inspection showed that the chain was not actually broken – it had only sprung a link, no doubt from my own haste and lack of care in putting it on. So I fetched the chain tool, fixed it, and resolved to go by another, less demanding route, just to see how everything ‘shook down’.

I turned downhill and headed into town, visiting a plant shop at Pauline’s request, then off along the Lade, an 800-year-old man-made stream that diverts water from the Almond (a tributary of the Tay) through Perth, originally to provide power for watermills. Now it provides some very pleasant walking or cycling through the town. 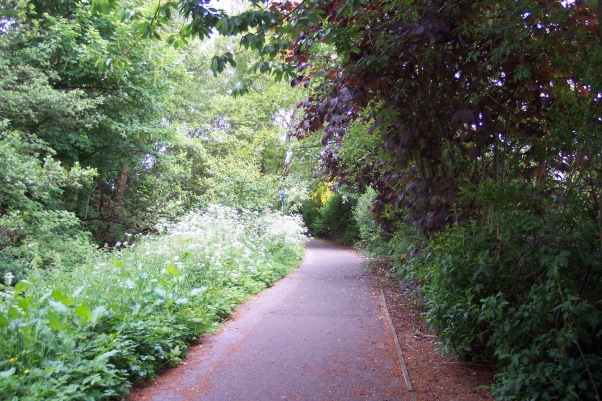 I meant to go on to Almondbank, but I missed the turn for the link to National Cycle Route N77 (you have to go over the railway bridge at Tulloch – I went the other way to Dunkeld Road). I crossed over, rode on for a bit, then turned into North Muirton and picked up cycleroute N77 going in the other direction, along the North Inch by the banks of the Tay:

by the flood wall on the North Inch, beside the Tay

The wall is part of the elaborate flood defences that were put in place in 2001 following a disastrous series of floods in 1990 and 1993. They were tested by another severe flood in 2006. From here, I headed along the North Inch to the Old Bridge, where the floods are marked. The bridge, built by John Smeaton, architect of the Eddystone Lighthouse, was begun in 1766  and completed in 1771, 150 years after its predecessor had been swept away in a flood, so it brought great economic benefit to Perth. It was widened in 1869 – the stone parapets were removed and footpaths built out on iron brackets on each side. Knowing that our town bridge predates the founding of the United States affords me a simple pleasure.

The journey – the first I had made in a couple of years – had the desired effect: it was a shakedown for me as well as the bike. I renewed my acquaintance with the joy of riding, experiencing the familiar sense of wondering puzzlement at how I could ever have stopped doing something so pleasurable.

The bicycle survived with no further mishap, though on checking on my return I found the Mountain Drive (which effectively clamps the bottom bracket by screwing into itself) had worked loose, again the result of a hasty lack of care in installing it – still, that’s what shakedown trips are for. I tightened it up and put the bike in the shed, quietly elated.