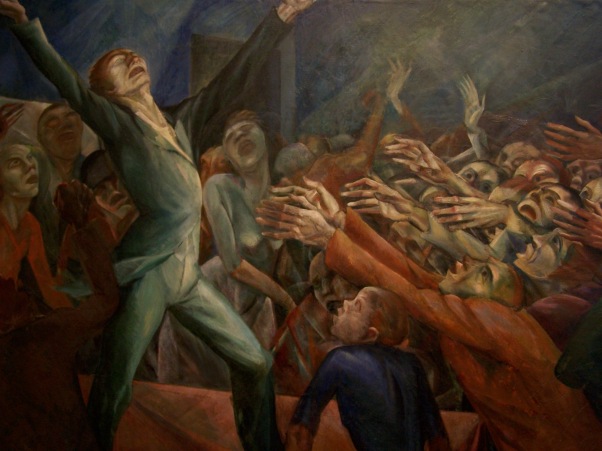 (this painting, which brilliantly captures the theme of this piece, is The Orator by the German expressionist Magnus Zeller – click to enlarge: it’s worth a closer look)

We live in querulous times: there is a lot of anger about; a lot to be angry about. The lines Yeats wrote in 1919 (about the same time Zeller made his painting) spring to mind:

Most of us enjoy a rant from time to time; it lets off steam, discharges pent-up passion. It has its place in the range of human activity, though over-indulgence can become tedious.

As a form of entertainment, directing a torrent of abuse at a person, practice or thing has a long history; here in Scotland (and in Ireland – the tradition is a Gaelic one) it was called ‘flyting’ and the great masters of such invective were (of course) the poets – the most famous of these exchanges is the contest between Dunbar and Kennedy, which you can find in full here . If you want a flavour, here is a morsel, in the original old Scots:

Both John the Ross and thou shall squeal and skirle

An’ ever I hear aught of your making more.

(Fantastic fool, trust well you will be flayed.

misbegotten foundling that nature made a midget,

John Ross and you will squeal and scream

if ever I hear any more of your versifying)

In more recent times, about twenty-odd years ago in Britain, the rant became a feature of the alternative comedy scene (about the time when comedy and I began to part company). No stand-up routine was complete without the performer having at least one sustained blast of invective on some subject close to his heart. Of course the sight (and sound) of someone letting rip without restraint can be invigorating, though I was never a great one for shouting myself. The key to success in such performances was choosing the subject of the rant: it had to be something that the audience felt equally strongly about, but were hesitant or unable to express their feelings on; so the performer on the stage spoke for all of them, becoming a conduit for their stored-up anger.

Nothing wrong with that, of course: it is stimulating and encouraging to hear the views you harbour (perhaps secretly) expressed forcefully; liberating, too – ‘it’s all right to say these things out loud’. It kindles the fire in the belly – but is it advocacy?

At first glance, it might seem so – an advocate is one who speaks on behalf of another, or others; one who gives them a voice. Surely the ranter does just that, raising his (or her) voice in anger on behalf of the silent, the inarticulate, the hesitant, the timid?

Well, yes and no. For me, the key question is whom you are speaking to, and to what purpose. The rant is, essentially, preaching to the converted: it is intended for home consumption; its audience are those who already agree with what you are saying, and feel delighted and empowered to hear it forcefully expressed – it makes them feel good about themselves, rallies them to the cause, strengthens the waverer.

There are two objections to substituting ranting for advocacy: the first is that, as a general rule, it will fail; the second, more worrying, is that it may succeed.

You will rarely gain the ear of the powerful by shouting at them and saying how angry you are, any more than a child will bend its parents to its will by throwing a tantrum: all you are doing is demonstrating your own powerlessness. But in the court of public opinion, passion can persuade, and therein the danger lies.

It is one thing to say ‘I feel angry about this, and you should too, because –’ quite another to say ‘Because I feel angry about this, you should, too.’ In the first case, the anger springs from reasons, which have to be furnished if anyone is to be persuaded to share your viewpoint; in the second case, the mere fact of your anger is being offered as a substitute for reason – ‘the fact that I feel passionately about this should be enough to persuade you’.

That is the critical point: the fact that I feel something – no matter how strongly, how passionately, how sincerely – should never be enough to persuade you to go along with me: I might, after all, be sincerely and passionately wrong. But zeal is infectious: it is exciting to feel the fire in your belly, and if you feel angry, frustrated and powerless – as many people do – then zeal for a cause – any cause – is a great way of expressing all that pent-up passion. But zeal is impatient, which makes it dangerous – it doesn’t want to spend all day listening to arguments, weighing pro and con; it wants to do something: ‘you’re angry? I’m angry too – let’s go and smash stuff up!’

So, by all means, rant; but be mindful of the effect on your hearers. As Yeats continues:

Mere anarchy is loosed upon the world,
The blood-dimmed tide is loosed, and everywhere
The ceremony of innocence is drowned;
The best lack all conviction, while the worst
Are full of passionate intensity.

(My thanks are due to Hart Noecker, who stimulated this line of thought: you can find his blog here. Hart and I, fundamentally, share the same view, though – being from different generations and different sides of the Atlantic – we might diverge on how we express it)