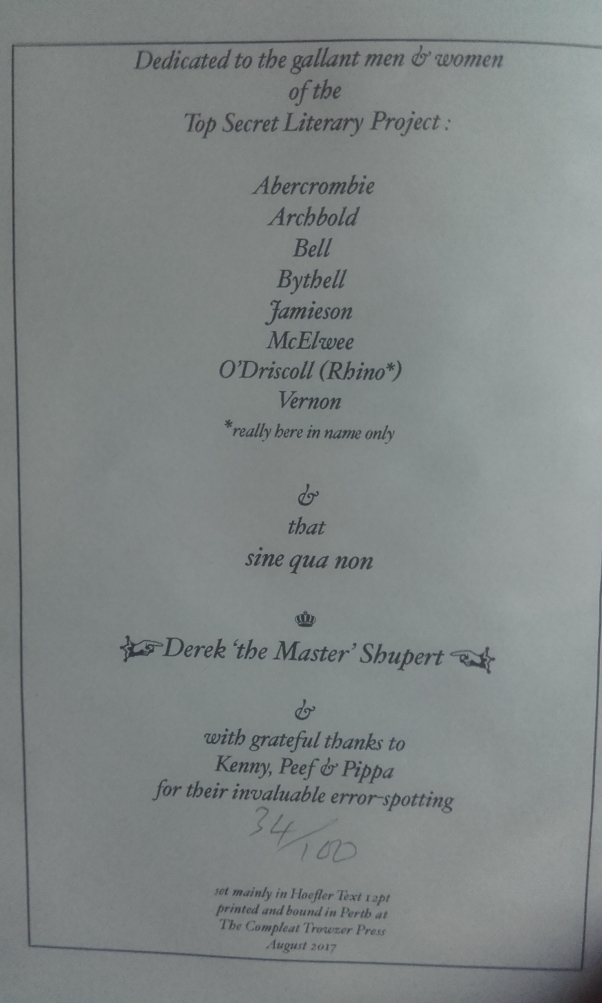 There is a world of difference between telling a story and telling a story to someone. It can be likened to shouting at the sky and having a conversation: you might well manage to remain coherent and intelligible while doing the former, but you’re more likely to manage it in the latter.

So I owe a debt of gratitude to the members of the Top Secret Literary Project, the private Facebook page on which The McAvinchey Codex was first published, in weekly episodes; and likewise to Derek Shupert, who brought us together in the first place, through his notable contributions to the Zombie Infected Horror Suspense Novel – a genre he may have created, and has certainly advanced as no-one else has done. The Top Secret Literary Project in question was an hommage to Derek’s oeuvre, in the form of a Literary Zombie Infected Horror Suspense Novel; but The Salon of Death, a Norfolk & Goode publication by Vernon Abercrombie Bell, may be, like The Giant Rat of Sumatra, a tale for which the world is not yet ready*.

Thanks to the gallant men and women of the Top Secret Literary Project, I achieved in nine months what I had signally failed to do in the previous ten years or more – I brought The McAvinchey Codex to completion. The question now was what to do with it.

*however, if you are particularly keen, you may find it here – but be warned, it is not for the faint-hearted. Derek’s oeuvre can be had, at a price, via the online retailer that threatens the very existence of bookshops everywhere.

Well, here I am in the Bookshop, Wigtown, at the height of the Wigtown Book Festival, Scotland’s Literary event of the year (and I say that as one who has appeared more than once at the Edinburgh Book Festival). Those red books on the table, in the case and in the basket, are mine. There are one hundred of them in total, though not all of them are in the picture.

When I say they are mine, I do not mean merely that they belong to me, nor that they are copies of a book written by me – though in fact they are – but that I made them in their entirety: they were typeset, printed, sewn and bound by me. They are, if you like, the ultimate in self-publishing.

The book is called The McAvinchey Codex, and purports to have been written by one Auberon ‘Bron’ Dawn, from which the more astute among you might guess that it is a parody of Dan Brown, the American writer.

This is the story of how it came to be made.