In 2009 the British Steam Car Challenge vehicle Inspiration set a new World Land Speed Record for a steam-powered car. The team behind it were awarded the Simms Medal by the Royal Automobile Club, named for its founder Frederick Simms, intended to recognise ‘a genuine contribution to motoring innovation by individuals or small companies that also exemplify the spirit of adventure.’

The citation by John Wood, Chairman of the Royal Automobile Club’s Awards Sub-Committee, is interesting:

“No one is going to suggest that this vehicle represents a major technical breakthrough, a relatively small improvement has been won at a cost of enormous complexity but it is unquestionably a triumph of determination, persistence and absolute refusal to give up in the face of adversity. Does it exemplify the “spirit of adventure”? Unquestionably! And that is why the British Steam Car Challenge Team, in memory of the late Frank Swanston, has been awarded the Simms Medal 2009.”

There is an implicit admission here that the award is not actually merited: while the courage, gallantry and dedication of the team cannot be questioned, the other criterion for the award has not been met. This was not a ‘genuine contribution to motoring innovation’ .

In the words of the citation, ‘a relatively small improvement has been won at a cost of enormous complexity.’ The scale of both the improvement and the complexity we will consider shortly, but first we need to look at the value (or otherwise) of land speed records.

For some, travelling supremely fast is an achievement in itself, but the main justification for trying to go as fast as possible has always been that the technical development it entails has a broader application that can be of general benefit. Creating a car that will travel safely at tremendous speed challenges engineers and designers on every front and the solutions they come up with, whether in terms of materials, streamlining, or the design of the engine and ancillary systems, can often, within a few years, find their place in mainstream manufacture.

Conversely, if they remain ad hoc solutions for the sole purpose of record breaking, their value is questionable – for instance, the use of jet propulsion may have raised the absolute LSR to supersonic levels (763 mph in 1997) with the ultimate aim of attaining 1000mph in the near future, but it is difficult to see what practical benefits this will bring – no-one considers jet propulsion as suitable for cars, and in any case, the cutting edge of jet propulsion is in its aeronautical applications, which already exceed anything that might be attempted on land. While there might be some peripheral benefits (in terms of materials and tyre technology, say, though of course the tyres are not driven) much of the technical effort, somewhat perversely, is directed to overcoming the inherent unsuitability of the power unit for this application.

Against this background, let us consider both the ‘enormous complexity’ of Inspiration and the ‘relatively small improvement’ won by it.

Inspiration weighs in at a hefty 3 tonnes. It is 7.66 m long by 1.7m wide and 1.7m tall. It is powered by a two stage turbine rotating at 13000 rpm for which steam is generated in 12 watertube boilers with 3km of tubing. This requires 3 Megawatts of heat from Liquid Petroleum Gas burners, enough to heat 1500 kettles or make 23 cups of tea per second. This complexity is clad in a combination of carbon composite to the front and aluminium panels to the rear.

Generating a relatively modest 360bhp, the car had a design top speed of 170 mph (for comparison, the Bentley Continental GT, a luxury production car, produces 626 bhp and is capable of 207 mph)

In the event, it took the record with a run of 139.843mph for a measured mile, subsequently raised to 148.308mph in two runs over the measured kilometre. 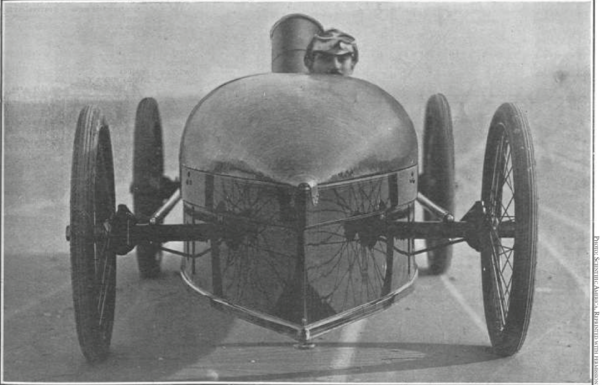 The previous record stood at 127.659 mph. It was set in 1906 by the redoubtable Fred Marriott driving the Rocket, a modified version of the production Stanley Steam Car. Its two-cylinder double-acting steam reciprocating engine generated around 150bhp and required 350 revolutions to travel a mile – so that 350 rpm would be a mile a minute, 700rpm would be twice that – 120 mph – and the record would require 740 rpm (for comparison, this equates to the typical idle speed of an internal combustion engine – 600-1000rpm – at which it generates sufficient power to run smoothly and operate various ancillaries like pumps etc. but not enough to move the car).

Rocket weighed in at 1675 lbs, with the entire power plant – boiler, engine, burner and firebox, pumps, tanks etc – contributing just under half the total (835 lbs). Its body was, in effect, an upturned canoe, consisting of canvas stretched over a cedar frame. It was 16′ long and 3′ wide and was made by a noted Boston canoe builder. The car was steered with a tiller.

In sum, a one-off vehicle weighing four times as much with an engine of far greater complexity (twelve times as many boilers!) and generating twice the power, managed to better the record set by a modified production car over a century before by  –

– a little more than 20mph, at the second attempt.

Unlike Inspiration’s, the record set by Rocket was absolute – Marriott was the fastest man on the planet, by any means. The following year, he went faster still, but the car crashed when it hit two ruts in the sand at Florida beach. At the time of the crash, he is conservatively reported as having reached a speed of between 140 and 150mph (i.e. the same as the record set by Inspiration) though Marriott himself – who survived the wreck – said that it was timed at ‘a hair under 190 mph’. 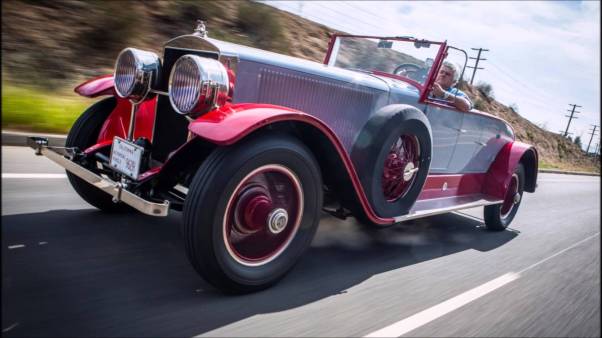 A couple of decades later, in 1925, the young Howard Hughes reportedly drove his Doble E20 roadster at 133mph. Hughes’s car was no record-breaking special, but a lightly modified standard production car in full road-going trim, with a huge flat condenser at the front, which can hardly have contributed to its aerodynamics. It is still on the road today, in the care of Jay Leno

My point is a simple one. As with the jet-powered. Bloodhound SSC, much of the design effort in the British Steam Car Challenge Inspiration was devoted to overcoming the inherent unsuitability of the power unit for its intended purpose. Steam turbines are best suited to running at constant high speed under heavy load, which makes them ideal for marine propulsion and generating electricity but ill-suited to use in cars. Although Rover experimented with a gas-turbine car in the fifties, no-one to my knowledge had successfully put a steam turbine in a car before Inspiration.

On the other hand, the one proven aspect of Rocket was the power unit. The motor-car was in its infancy but steam had been around as a motive force for nearly two centuries and by then drove shipping, railways, pumping stations and power plants. The steam reciprocating engine was well understood, simple and robust – the Stanley boasted a total of thirteen moving parts and its relatively low running-speed meant that it was unstressed and highly durable.

It was at its zenith in that first decade of the century when the motor-car was still a rich man’s plaything, so that the superior smoothness and quietness of the steam engine outweighed its expense initially, in running and in maintenance; the fact that it took a good half-hour or so to raise steam mattered little if you could pay a chauffeur to do that for you. By the time Abner Doble had overcome most of these difficulties in the 1920s, it was too late: Henry Ford had already established the internal combustion engine as reliable, robust and cheap to run.

Nonetheless, the advance in performance and design that Doble’s car demonstrated in rather less than twenty tears surely make it a far better template for a record-breaking car than the one chosen by the British Steam car Challenge. And while Inspiration is a dead-end, as far as practical application goes, a Doble-based car that took advantage of the advances in design and materials in the last ninety years could be just what the world is looking for.

Many countries in Europe have already fixed dates for the end of internal combustion as a motive force in cars, and most people think that the future lies with electricity. But with improvements in burner technology, sustainable fuels, economic high-pressure steam generation, ultra-low friction engine materials (such as ceramics) and improvements to condensers and autonomous systems, a strong case could be made for steam.

It is certainly an experiment worth trying.